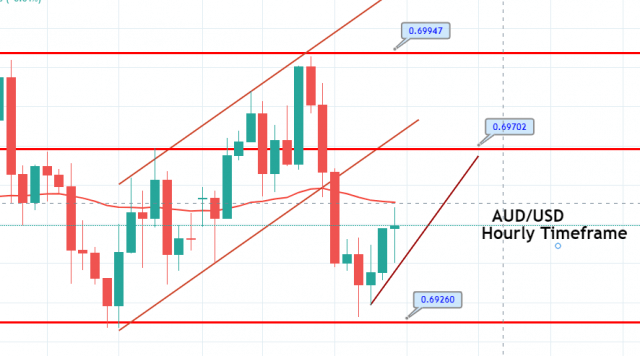 The AUD/USD currency pair extended its early-day recovery moves and rose to a session high around the 0.6945-56 region. However, the bullish bias in the currency pair could be attributed to the upbeat China trade data, which showed the unexpected jump in the imports and exports. On the other hand, the risk-on market sentiment backed by the multiple factors undermined the perceived riskier Australian dollar. It kept a lid on any additional gains in the currency pair. The broad-based U.S. dollar bullish bias triggered by the rise in the U.S. bond yields also capped the further upside move in the currency pair.

For the month of June, trade figures from China suggested that the world’s largest commodity player, including the key customer of Australia, gained further momentum in its post-coronavirus (COVID-19) recoveries, witnessed by the fresh report that showed the Exports and Imports crossed the previous +1.4% and -12.7% figures with fresh +4.3% and +6.2% marks respectively.

On the other hand, the increasing cases of coronavirus in Australia’s most populous states and 35 states of the United States overshadowed the prospects of V-shaped global economic recovery. As in result, Australia’s Prime Minister decided to re-impose lockdown and border restrictions to contain the spread of coronavirus cases, which exerted some downside pressure on the Aussie currency and limited the pair’s gains.

The number of COVID-19 cases globally passed the 13 million mark as of July 14, according to Johns Hopkins University data, with more than 565,000 people died in the last 7-months due to the virus. On the other hand, Brazil and India also followed the footstep of the U.S. They became nations with the 2nd highest number of appearing cases after the U.S. Elsewhere, the figures from Australia, and some parts of Asia were also increasing day by day.

However, the gloomy outlook was further bolstered by the ongoing tussle between the United States and China. The conflict between both parties was further fueled after the Trump administration rejected China’s territorial claims in the South China Sea. The U.S. Secretary of State Mike Pompeo blamed China for threatening other claimant states in the South China Sea. As in result, the Dragon Nation also fired shots on the United States while saying that the U.S. was trying to inflame tensions in the disputed waters.

Although, the US-China tussle got an additional pace after China showed a willingness to impose new sanctions on the U.S.’ defense company, Lockheed Martin, in response to planned arms sales to Taiwan. Let us recall, Dragon Nation previously announced tit-for-tat sanctions on four U.S. officials, including senators Ted Cruz and Marco Rubio in response to Washington’s imposed visa restrictions on Chinese officials over the treatment of the Uyghur community in the northwestern province of Xinjiang. These headlines favored the risk-off market sentiment and kept the currency pair restricted.

As per the latest statement, Japanese Economy Minister Yasutoshi Nishimura said that his government could declare an emergency if infections grew further. Besides, the number of COVID-19 infections has spiked in the past week, with Tokyo reporting more than 200 cases for three straight days. However, these above headlines added further strength to the risk-off market mood.


The AUD/USD is trading in between the sideways trading range of 0.6969 to 0.6925, while a bullish breakout of 0.6969 will help determine the next pair’s movement. On the higher side, the AUD/USD pair may find the next resistance at 0.6995 as soon as 0.6969 gets violated. The MACD and RSI are heading into a bullish zone, and these are supporting the bullish bias in pair. Here’s a trade plan below…