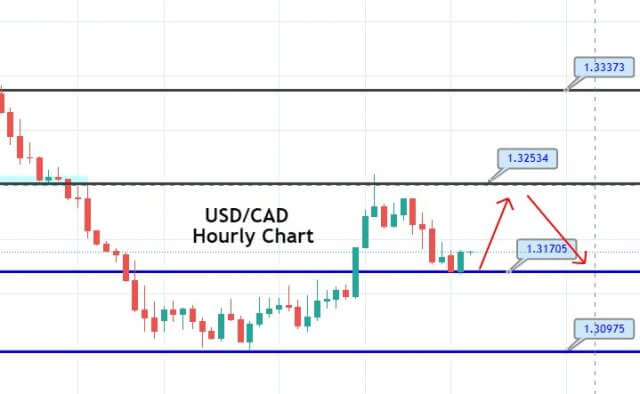 The USD/CAD was closed at 1.31927 after placing a high of 1.32374 and a low of 1.31770. Overall the movement of the USD/CAD pair remained bearish during the Aisan session today. Most of the selling is seen following the gains in USD/CAD for three consecutive days. The USD/CAD pair posted losses on Friday amid the mixed sentiment around the US stimulus package and Canada’s strong data. On late Thursday, President Trump said that he was raising the size of a fiscal stimulus package to win the support of Democrats to deliver the package to struggling Americans. The republicans were not in favor of big stimulus, and it raised concerns that the stimulus package will not be delivered before elections.

This raised the risk sentiment and pulled back the demand for the safe-haven greenback, and made the USD/CAD pair to post losses on the day. However, the investors remained doubtful about the concerns related to a steep rise in new coronavirus cases in Europe, and this continued to lend some support to the US dollar due to its safe-haven status. The improved US dollar helped cap further losses in the USD/CAD pair.

Meanwhile, the rising fears that another round of lockdowns worldwide to control coronavirus spread could weaken the global energy demand affected crude oil prices. The WTI crude oil dropped on Friday and weighed on commodity-linked Loonie that helped the USD/CAD pair to limit its losses on Friday.

The risk sentiment in the market also kept the USD/CAD pair’s losses limited on Friday after the US pharmaceutical giant Pfizer said that it is expected to file for emergency use authorization for its COVID-19 vaccine in late November. The company said it would move with the vaccine after its safety data are available in late November. The news’s risk sentiment was boosted and kept the USD/CAD pair’s losses under control.

The USD/CAD is trading mostly sideways over the 1.3170 level, and recently, it’s trying to a bullish engulfing pattern that may drive upward movement in the market until the 1.3250 level. Conversely, the bearish breakout of 1.3175 level can drive selling bias until 1.3095. Overall, the RSI and MACD are in support of selling bias until the 1.3095 level. Let’s consider taking a buy trade over 1.3170 and selling below the same level today. Good luck!