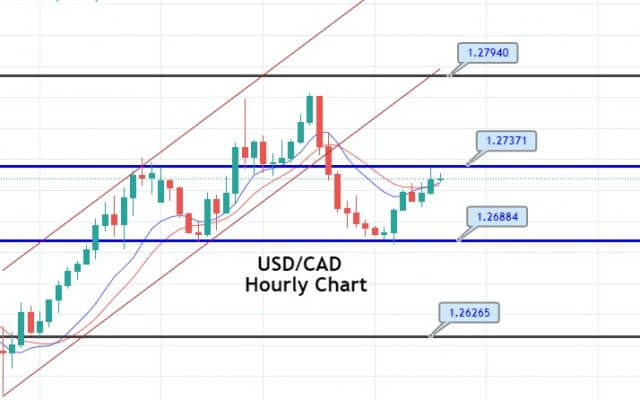 During early trading hours on Tuesday, the risk-off market sentiment kept weighing on the USD/CAD pair as the US dollar was strong due to its safe-haven status. The greenback gained traction after the tensions between the US & China erupted once again at the South China Sea. Furthermore, the Chinese President’s latest warning against the New Cold War also played an important role in giving strength safe-haven greenback.

The Chinese President Xi Jinping warned global leaders on late Monday that starting a new Cold War should be avoided and urged unity in the face of coronavirus pandemic. He added that threatening others and building small cliques will only push the world into division.

Furthermore, the report from John Hopkins University suggests that the global count of confirmed coronavirus cases reached 100 million in a year and raised concerns for global economic recovery as many nations were still under lockdown and weighed on market sentiment that ultimately weighed on the risk perceived USD/CAD pair.

Meanwhile, the market’s risk sentiment started to turn around as the positive news from Moderna and Pfizer came in to deliver booster shots of the vaccine in about 6-12 months that will provide full immunity. Whereas Johnson & Johnson also announced that it would release data on its vaccine for coronavirus. It was highly awaited as J&J has advertised its vaccine as a game-changer because it would provide full immunity in a single shot, unlike other vaccines so far.

However, the USD/CAD traders seemed to ignore the rebound in market risk sentiment and continued moving with the risk-averse market sentiment, and hence, the USD/CAD pair remained depressive for the day.

On the crude oil front, the traders also ignored the movements of West Texas Intermediate crude oil prices on Tuesday that declined to $52.27 for the day and weighed on commodity-linked currency Loonie that ultimately caped further downside in the movement of USD/CAD pair.

On Wednesday, the traders will keep a close eye on the US Federal Reserve’s decision to find fresh impetus about the USD/CAD pair movement.

The USD/CAD pair continues to trade sideways in between a narrow trading range of 1.2737 – 1.2688 level. Breakout of this level can drive further moves in the market. On the higher side, the USD/CAD pair can lead it’s price towards 1.2794 and on the lower side, support holds around 1.2626. Let’s brace for a breakout!