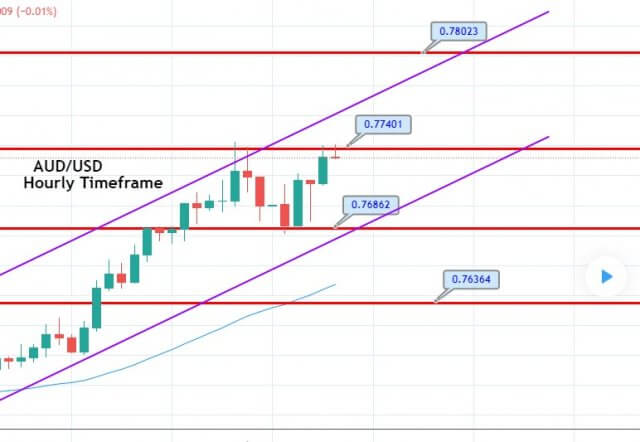 The AUD/USD continues trading bullish at the 0.7740 level, heading further higher, but only if the Aussie gets to violate the 0.7740 resistance level. The dollar seems to get weaker amid a rising number of coronavirus cases despite the vaccine rollout raised fears and supported the appeal for safe-haven, but the dollar is getting weaker. Ultimately weighed on the risk-sensitive Aussie that added in the losses of the AUDUSD pair.

The currency pair AUD/USD posted losses for the day despite the US dollar’s weakness on Monday. The US dollar was weak across the board as the investors were cautious about putting any strong position in the market ahead of Tuesday’s Georgia’s Electoral runoff and Wednesday’s FOMC release of meeting minutes from December. Furthermore, the US caseload of coronavirus infections surpassed the 21,110,917 number and weighed on local currency as the country was worst-hit by the virus.

Meanwhile, on the data front, at 06:45 GMT, the Caixin Manufacturing PMI from December dropped to 53.0 against the expected 54.7 and weighed on China-proxy Aussie that ultimately added losses in AUD/USD pair.

The AUD/USD consolidates in a narrow trading range of 0.7685 – 0.7740 level, and a bullish breakout of this range can trigger further upward trend until 0.7802 level, while on the lower side, the support continues to hold at 0.7686 level. A bearish breakout of 0.7686 level is likely to drive selling until the 0.7636 mark. Let’s brace for a breakout. Good luck!