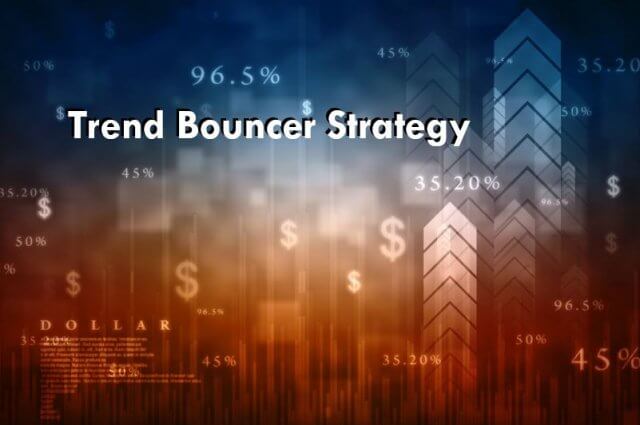 The activation of a trend can be from a political decision or an improvement in the GDP of the economy. Some other reasons include the central bank policy announcement and the discovery of new resources. Trends move like waves causing long to short term price movement in both the directions of the market.

In an uptrend, we observe that, at a certain point in time, price pullback, or retrace before continuing with the upward movement. Similarly, in a downtrend, prices retrace upward against the downward movement before continuing their way down again. This ebb-and-flow movement can be frustrating for many new traders because they are not familiar with such market moves and often get stopped out before the market starts to move in their direction later.

Experienced trend traders usually wait for a retracement before taking a trade in the direction of the major trend. This is how the trend bouncer strategy was introduced. The Bollinger band indicator provides an effective way of identifying the up and down movement of a trend.

Since this is a trend trading strategy, we will have more than one profit target. We have two specific profit levels for this strategy.

The trend bouncer strategy works well with the 1-hour and 4-hour time frame chart. This means each candle on the chart represents 1 hour and 4 hours of price movement, respectively.

We will use two Bollinger bands with the following settings.

One should have a clear understanding of the Bollinger band indicator before using it for this strategy. Refer to our articles on Bollinger bands for an explanation of the indicator.

The strategy is suitable for trading in all currency pairs listed on the broker’s platform, including major, minor, and few exotic pairs. However, it is better to trade in highly liquid currency pairs.

With the Bollinger band indicator’s help, we can objectively identify the ebb-and-flow movement of a trend. When the price hits the upper band of the first Bollinger band (MA 12, Dev 2), it indicates an upward movement. In this scenario, we prepare to go long in the currency pair. As prices retrace back to the centerline of the Bollinger band (MA 12), a significant retracement has occurred, and it is time to enter for a ‘long.’

Similarly, when prices hit the lower band of the Bollinger Band (MA 12, Dev 2), it indicates a momentum to the downside, and we prepare to go ‘short’ in the currency pair. As prices retrace back to the centerline of the Bollinger band (MA 12), and it is time to enter for a ‘short.’ We will exit our ‘trade’ in two places, which we explain in the coming section of the article.

In order to illustrate the strategy, we have taken the example of the USD/JPY currency pair on the 4-hour time frame, where we will find a ‘long’ opportunity in the market using the strategy. Here are the steps of the trend bouncer strategy in forex.

In this example, we see that the market has shown signs of reversal, which could extend on the upside.

The next step is to wait for the price to hit the upper band of the first Bollinger band, in case of an uptrend. Similarly, the price should hit the lower band when trading the pullback of a downtrend. This gives us the confirmation that a trend has been established. Now, we need to wait for a retracement of this move before we can enter the trend.

In the below image, we can see that the price exactly touches the upper band of the first Bollinger band (MA 12, Dev 2), and now we will wait for a pullback to join the trend.

The next step is to wait for the retracement to touch the Bollinger band’s centerline. The intersection of the price and the centerline is the entry signal for the strategy. An important point to make a note here is that the pullback shouldn’t come in a single candle. This means the pullback should come in multiple candles. The longer it takes, the weaker the pullback. In such cases, the is a higher chance that the trend will continue.

In our example, we are entering for a ‘long’ as soon as the price touches the Bollinger band’s centerline. We also see that the pullback has come in 6 candles, which is desired.

Understanding the trending nature of the market helps us to identify the direction and timing of our entries. The best part of this strategy is that we bank profits in various stages. With a momentum indicator like the Bollinger band, we greatly increase the odds of being profitable in the long run.