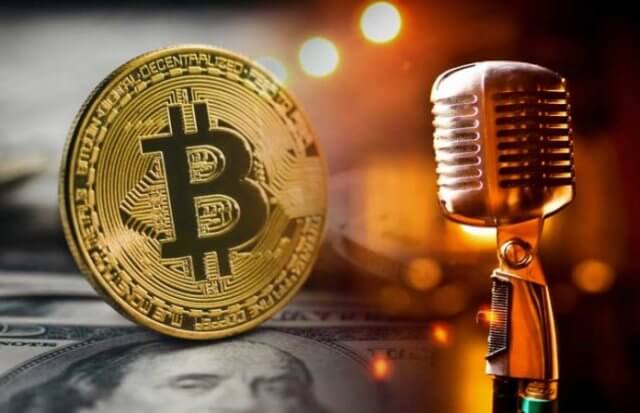 Times are gone when Bitcoin was a fringe currency and a fleeting phenomenon not worth much attention. Today, the cryptocurrency has broken into the spotlight and rallied an entire industry of cryptocurrencies into the center of finance. So much that even pop culture has started paying attention.

From songs to films to TV shows, cryptocurrency is being featured in various ways in the entertainment industry. And crypto fans are lapping it all up since it’s helping to push the industry to the forefront.

Here are times crypto has featured in pop culture

i) Spiderman: Into the Spider-Verse (Movie)

In the animated Spiderman movie, a ticker at the bottom of the screen announces: ‘Bitcoin hits a new low’ immediately followed by ‘Bitcoin hits a new high.’ The split-second scene is inspired by Bitcoin’s infamous volatility while also poking fun at it. It seems that Bitcoin shoots and plummets within nanoseconds in Spider-Verse. Either way, it’s nice to see Bitcoin exists in alternative universes.

The veteran rapper has not been left behind by the Bitcoin craze. In his 10th studio album released in 2018, Eminem references the cryptocurrency in the song “Not Alike,” singing: “Remember everybody used to bite nickel, now everybody doing Bitcoin.”

Fan-favorite series The OA features not just cryptocurrency but also a crypto wallet. In the pilot episode, an elderly woman seeks the help of a detective to find her missing granddaughter. But she has no money, at least in the traditional sense. Instead, she has Ethereum, which is stored in Ethereum wallet Freewallet on her phone. The wallet displays her Ethereum balance.

Marvel’s 2018 movie: Hunt for Wolverine – Adamantium Agenda mentions Bitcoin. At one point, Tony Stark needs to make payments. Due to the risk of the characters he’s dealing with, the assumption is that he will use the usual untraceable cash. But this time, he must use cryptocurrency.

New on the scene, the Japanese girl group: Kasotsuka Shojo’s name translates to ‘Virtual Currency Girls.’ Each of the eight members represents one cryptocurrency. The band’s members are as follows:

Speaking to Japan today, the group divulged its aim as being to raise awareness on cryptocurrency and its potential for society. “This unit is not here to promote speculation of investment. Out of the numerous existing virtual currencies, we have carefully selected a handful of currencies that are sure to exist in the future in order to broaden the public’s understanding of them using entertainment as our medium.”

Each of the members dons a mask representing their currency. Their first release was called “The Moon and Virtual Currencies and Me.”

Bitcoin is now inspiring artists so much as for them to create exhibitions with the currency as the central theme. In 2014, San Francisco living space startup 20Mission used art to express itself. In 2014, the startup held an art show dedicated to Bitcoin.

Everyone’s favorite medical drama made sure to mention the world’s most popular cryptocurrency. The winter finale of 2017 delved into ransomware and Bitcoin.

In the episode, Grey Sloan Medical Hospital is dealing with a cyber-attack. Screens are popping with the words, “We own your servers. We own your systems. We own your patients’ medical records.” The hackers then request 4,932 Bitcoin as ransom. (The value was about $20 million) at the time of airing)

The animated sitcom which has been running since 1999 has made sure to catch up with the modern currency. In season 14, the show’s protagonist Peter Griffin suggests Bitcoin might be the family’s solution to their financial woes. This is after the family huddles around and prays for a financial miracle, only to find their pockets empty.

In season 5  Silicon Valley, the TV show focuses on cryptocurrency. As it stands now, the depiction by the show might be one of the most accurate and realistic ones yet. From crypto to ICOs to Bitcoin, it covers it all. And rather than creating an unrealistic view, it serves audiences with what’s more likely to happen in the real world. For instance, Gilfoyle’s PowerPoint presentation explaining cryptocurrency is pretty accurate.

So is the depiction of the wild pitfalls that a startup is likely to encounter while launching an ICO. In one scene, Monica (Amanda Crew) warns Richard (Thomas Middleditch) about jumping on the Bitcoin ship, saying, “Before you walk away from stability and gamble your entire company in crypto, there’s another friend of yours I think you should talk to.”

In a 2016’s film Bitcoin Heist, an Interpol agent brings together formidable elite hackers to create a team that will track down the world’s most wanted thief. Together, they set on a mission to carry out the ultimate cryptocurrency heist.

Written and directed by Vietnamese director Ham Tran, the film puts Bitcoin at the center of the action. The movie is now available on Netflix and has an impressive approval rating of 79% on IMDB.

xi) We Miss You: The Bitcoin Dip ( Song)

This is a play on Puff Daddy’s “I’ll be Missing You,” by Crypto Daily, with the catchy tune reminiscing the days when Bitcoin was $10,000 and above. It impresses the hope that although the currency is going through rough and volatile times, it will one day bounce and go past $10, 000 again. At the time of writing, the song’s video has 64, 000 views on YouTube.

British-born singer Laura Saggers is just like us. In the song 10,000 bitcoins, Saggers imagines the things she would do if she had all that money. From getting her lover a rear-wheel-drive to paying for them to fly, to taking them on a tour of their favorite breweries. But while she doesn’t have the Bitcoins now, “a day doesn’t go by where” she “doesn’t work hard and try.”

It’s impressive to see cryptocurrency has warmed its way into pop culture. While it’s fun for crypto enthusiasts to see their favorite type of currency in entertainment headlines, it’s great to know that for every pop culture mention, more people learn about it. This will slowly push the idea into the mainstream conscience and, hopefully, use it. It will also help to dispel the myths surrounding it, such as that crypto is just a currency for criminals.