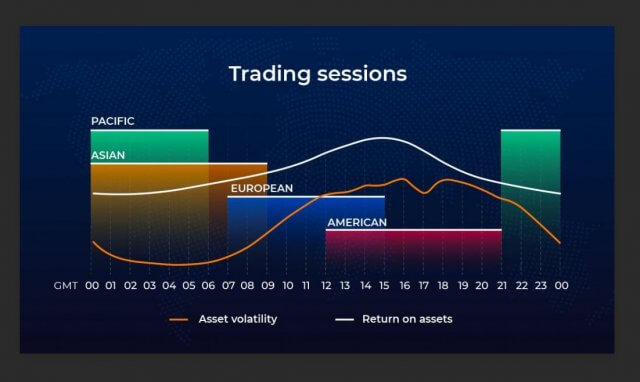 The forex markets are a 24-hour business (Sunday to Friday), but people need to sleep, so how does it stay open 24 hours a day? Well, there are four different trading sessions based on different continents that relate to their timezone. So while London sleeps, Tokyo will be running.

The four trading sessions as the Asian session (which is both Sydney and Tokyo), the London session, and the New York session. Let’s get a little more information about each one.

The Asian session runs from 22:00 GMT to 08:00 GMT, it is made up of both the Sydney markets and the Tokyo markets.

The London session runs from between 08:00 GMT and 16:00 GMT, this has a slight cross over with the New York Session between 13:00 GMT and 16:00 GMT. the Londo session is considered to be the major market session and often attracts the most interest as the key financial center for Europe.

So that is a little overview of the three (four if you could Asia as two) trading sessions that keep the forex trading world running 24/7. The session that you should trade in depends on the pairs that you wish to trade, but we would suggest sticking to ones that don’t keep you up in the middle of the night.