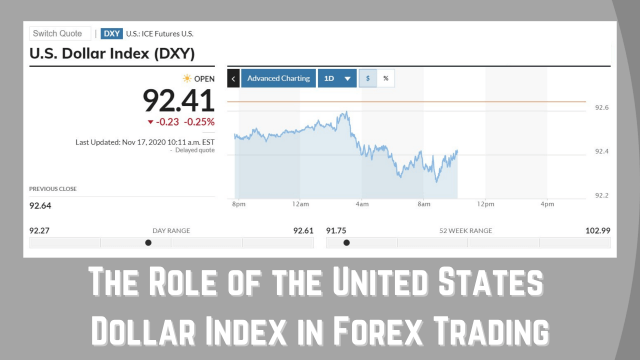 The US Dollar Index is something that you often see mentioned around the trading world, if you haven’t seen it mentioned then it probably won’t be long until you do. If you haven’t, then it would be a good idea to get to know a little more about it, the US Dollar Index is a great tool that can help you to confirm if there is a directional bias for the currency pair that you are currently trading, it can also help to warn you of awesome potential barriers to your trade before you decide to place the trade.

The Federal Bank in the US is one of the more important central banks in the world, the US dollar is also one of the most traded currencies in the world making up to 70% of all transactions each day, so being able to have an idea of what the Dollar is doing on any day will give you a huge advantage for your trading and you as a trader, and that is exactly what he US Dollar Index will help us do.

So what exactly the US Dollar Index? It started back in 973 for the value of 100.000. In 1985 the USDX (US Dollar Index) traded for as high as 164.7200 and then on March 16 2008, it dropped as low as 70.698. So the USDX can range quite a bit moving both up and down, the ranges are often quite large having large trends. However, this is not always a guarantee and so this is why it should be used as an indicator only instead of as an actual trading tool to make trades.

The USDX is basically a measure of the US dollar in relation to a basket that will contain a number of the most important trading partners for the US. The basket has six different foreign currencies within it, with each currency having a different weighting due to the size of the country or countries using the currency, for example, the Euro has 23 different countries within it and so it is weighted slightly higher than a smaller one such as the Swiss Franc. The largest part of the USDX is made up of the Euro which currently weighted at 57.6%. The following currencies are included in the USDX:

So it is clear that the value of the USDX is influenced quite heavily by the Euro, this is one of the clues as to why the USDX will be useful for us as traders when it comes to making trading decisions.

The USDX can actually be seen as a kind of anti-euro indicator, due to the Euro having such a high weighting on the USDX, it means that there is a kind of negative correlation between the two. When the Euro falls the USD will generally rise, and when the Euro rises the USDX will generally fall. Knowing this can mean that we are able to use the USDX as an indicator for the potential movement of the EUR/USD pair.

There is something known as the smile theory, this is basically a good way of mentally remembering the three different ways that the dollar responds to different situations. It is called the smile theory because the three different situations create the shape of a smile. On the left of the smile at the top, we have the USD strength that is formed when the global economy is starting to struggle. The bottom part of his smile is where the USD depreciated on something known as a dovish feed. The right side of the smile, the right upper part, is when the USD gains value on something known as a hawkish feed and risk on the environment. This then creates a smile like a graph. The smile theory allows you to get an overall picture of understanding where the dollar is at present and what is likely to happen next.

If you manage to get into the habit of looking at the US Dollar Index prior to making any trades, it gives you another indication of what could happen and could also be used as an additional confirmation for your trades. As with anything in trading, nothing is a guarantee, you cannot rely on the USDXto show you the exact direction or exactly what any currency or currency pair will do, simply use it as an indicator and nothing more. It can be quite a powerful tool and can really give you a little edge when trying to work out the potential direction and bias of the markets, so it is a good idea to get to grips with how it moves and how it works in order to implement it into your own trading analysis.