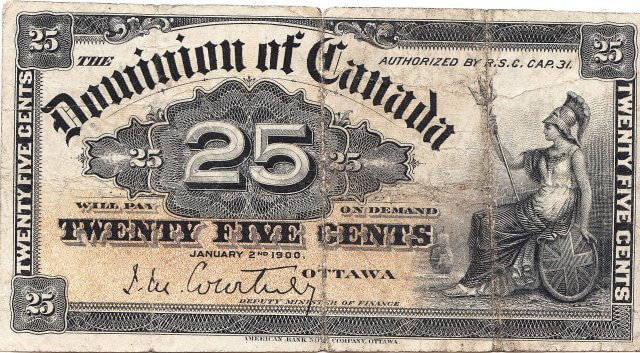 The Canadian dollar, which is also known as the CAD, may not date back long in time like some other currencies (e.g. the British pound), yet its history is equally fascinating. Although the CAD is relatively young, it is now believed to be the seventh most traded currency in the world. Back in 1941, an important decision was made in the Province of Canada, a then-new British colony in North America, to make their currency a one-tenth value of the United States’ Golden Eagle $10 coin. This change meant that the two currencies were connected more tightly and that the value of the CAD depended on the worth of the USD. As Canada did not have a central bank for some time, the printing of money was a duty performed by several private banks.

As Canada kept growing, new Canadian territories slowly started to adopt the CAD – Nova Scotia in 1871 and Newfoundland in 1949. The currency was pegged to the USD quite a few times throughout history: 1841—1933, 1940—1950, and 1962—1970. Despite the peg, Canada always demonstrated the air of independence, and this was particularly noticeable during the Great Depression when the Canadian government decided to move towards having their own monetary policy and central bank. Hoping to protect itself from the economic downfall that was particularly prominent in the US, Canada was pushed into making their own central banking institution and take over control of their currency. The CAD is nowadays also referred to as a loonie, which is the name of a bird that is printed on the C$1 coin, which incidentally inspired the derivation of the name toonie used for the C$2 coin. Aside from C$, some similar variations that include the dollar symbol are used as well so as to make a difference from other dollar-denominated currencies, notably CA$ and Can$.

For almost one entire century, Canada managed to go without a central bank with 10 private banks handling the issuance of the CAD. Nevertheless, the benefit of printing money was never intended for the government of Canada to reap, but the banks alone. One of the biggest banks at the time, the Bank of Montreal, grew to become a more dominant institution that acted as a central bank. This bank was, however, an independent player whose goals were not necessarily aligned with Canada’s needs, especially since there was an overall lack of autonomy and vision. After the Great Depression, Canada became aware of the need to become more separate from the USD, which brought forth the creation of their own central bank.

In 1935, the Canadian government did take necessary action and established the Bank of Canada, which then took on the responsibility of running the currency. The Bank of Canada (BOC) now holds meetings eight times a year to discuss matters pertaining to their goals of maintaining price stability. Unlike other central banks, such as the Federal Open Market Committee (FOMC) in the United States, the BOC has a single mandate, which has proved to be quite limiting for enacting monetary policy. Some other single-mandate central banks, e.g. the European Central Bank (ECB), do not deal with maximizing employment and GDP growth. As the ECB is only concerned with price stability, they are often unable to provide the assistance Europe requires. Canada, however, appears to be handling this issue much better, which could be potentially attributed to its laws.

The BOC in fact seems to be acting as a dual-mandate central bank, which has been supported by their actions during some periods of crisis in the past. The new Governor of the Bank of Canada and the Chair of the Board of Directors, Mr. Tiff Macklem, was appointed in June this year, at a rather difficult time when many Canadian citizens and companies requested support in order to withstand the COVID-19 pandemic. Owing to his expertise in financial markets, the new Governor is believed to be able to assist the central bank to weather the current economic crisis.

Canada is one of the largest economies, currently believed to be ranking in the top 10 economies in the world. Canada thrives on oil, mining, and logging, as these are the country’s biggest industries, which make the CAD heavily based on commodities. Canada still has strong ties with the United States, which is also its largest trading partner, and this relationship appears to impact the Canadian economy whenever there are changes in the US. Considering the fact that more than 50% of imports in Canada come from the US, any impediments in the US economy are likely to cause the same slowdown in Canada. In addition to the two economies being so closely intertwined, the CAD acts as the reserved currency for many Caribbean islands. What is more, one can even pay for all goods and services with this currency in some of the islands in this region.

Due to the strength of the Canadian economy largely stemming from oil, mining, and logging industries, the CAD has established some of its major correlations with the related commodities. The correlation between the CAD and oil, for example, has always been one of the more prominent ones although its nature and degree keep changing. In the past, traders have witnessed quite a high correlation between the two, which entails that once the oil goes down, so will the CAD during the same period of time. Information concerning such strong correlations can help traders assess the currency and come to an important conclusion that may help their trading. Nonetheless, as we can see from the chart below, these correlations are neither strong nor relevant 100% of the time, so the CAD and oil do not necessarily reveal any similar or dissimilar tendencies at all times. However, due to their historically prominent correlation, traders interested in the CAD should most definitely obtain information on what is currently happening with oil, what some of its previous tendencies were, and where it will likely move in the future.

As the Canadian economy greatly resembles that of the United States, the same reports are going to apply: quarterly GDP reports, monthly employment reports, monthly retail sales, monthly producer and consumer price index (PPI and CPI) as well as a trade deficit. Any trader keen on trading the CAD can potentially rely on its knowledge and understanding of the US economy, as the Canadian economy largely models that of the United States.

The most-traded CAD-based crosses include USD/CAD, EUR/CAD, GBP/CAD, and CAD/CHF. In terms of volume and liquidity, the number one currency pair is USD/CAD, which is said to make more than 50% of all CAD transactions. The remaining four currencies fall behind on both volume and liquidity, which is an extremely important piece of information for traders. Understanding the nature of these pairs particularly comes to prominence during some news announcements, which often trigger lighter spreads and greater volatility. The EUR/CAD and GBP/CAD currency pairs both have decent volume, while most other crosses involving the CAD could be considered as more exotic. The AUD/CAD, for example, is an unusual pair primarily due to the vast geographic distance and the low quantity of trade between the two countries, which immediately leads to lower liquidity levels and greater width of the spreads. While trading the CAD, in general as well as in the face of any news events, the safest crosses are believed to be USD/CAD, EUR/CAD, and GBP/CAD.

Due to the fact that the Canadian economy is so heavily reliant on commodities, it is most likely to perform best during economic expansion. Any period of global growth involving a high demand for materials such as copper, steel, oil, etc. is assumed to be bullish for commodity-based currencies. Therefore, the CAD, too, is generally likely to be bullish during economic growth. Although this reaction of the CAD to the rising market may not always be true in 100% of cases, it is going to hold true for the majority of cases. Any time the price of commodities appears to be dropping, traders can ten assume that there is little demand for commodities such as copper, steel, or oil for example. Whenever the economy seems to be in recession, the CAD can be expected to underperform, experiencing difficulties.

In terms of interest rates, at 0.25%, Canada appears to have set neither the highest nor the lowest rates. While placed in the middle at the moment, Canadian interest rates are generally said to vary according to CPI and PPI inflation reports. As the Canadian economy greatly influences the state of commodities, traders can expect any rise in commodities to lead to a rise in inflation in Canada, causing the country’s central bank to increase interest rates. As we discussed before, the price of commodities will also affect the CAD and vice versa. In terms of trade deficits, Canada seems to be doing well in particular due to its large quantity of exports leading to a trade surplus. Currently, Canada plans to keep on offering quantitative easing programs in order to alleviate the impact of the COVID-19 pandemic. Nonetheless, the Canadian economy seems to be recovering, especially after the coronavirus restrictions started to ease although GDP is projected to shrink by 7.8% in 2020.

The CAD appears to have exhibited the greatest number of trend changes among all major currencies in the past few weeks. Going steady on the downwards trend line, the CAD broke the pattern through a reversal, followed by a bullish movement for three days straight, with the chart ending in a form of a pull-back. The nature of the continuation of this pullback may bring some lucrative opportunities, for example, should a reversal occur. Some market analysts state that they would prefer going on the upside than going bearish when it comes to the CAD at this time. It is interesting to know that professional traders believe that CAD has one of the best charts at the moment. Preceded by a clear change of trend and quite a few up-and-down movements, we may still not be able to see a true breakout, although the bullish reversal pattern is quite apparent at the end of the chart. This currency has been rather weak for a long period of time, but experts seem to believe that the CAD is finally going to start to go up in the near future. Just this past week, the CAD had a few important news events and economic reports come out, such as the Governor’s speech and the GDP report. Compared to other currencies, the CAD appears to be doing really well at the time, currently placed among the strongest currencies.