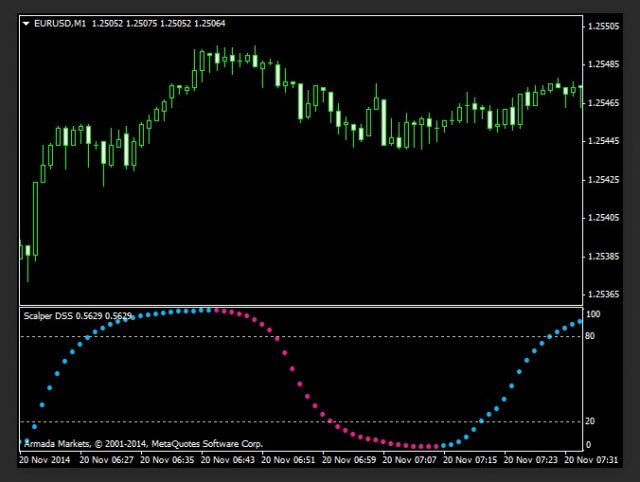 Dual Smoothed Stochastics – indicator (DSS Bressert) is a modified indicator with an alert. You can use it in any time frame. Graphs M1 and M5 are recommended to make use of this indicator, while higher deadlines can be used for day trading.

The settings that come by default give a very good result, but the parameters can be modified by the user according to his personal preferences. It is essential that you identify the trend before negotiation, and open a trade in the direction of the correct trend only.

Stochastic Double Smoothing – DSS Bressert is an oscillator, this tool was presented by William Blau and Walter Bressert in two versions with some nuances between them. The calculation of the values of DSS Bressert is similar to the stochastic indicator, the difference is in the use of exponential double smoothing. The advantage over classic stochastic oscillators is the speed in responding to price changes in a still very uniform flow pattern.

DSS Scalper is a Forex system for scalping traders. That is, short-term traders, where: 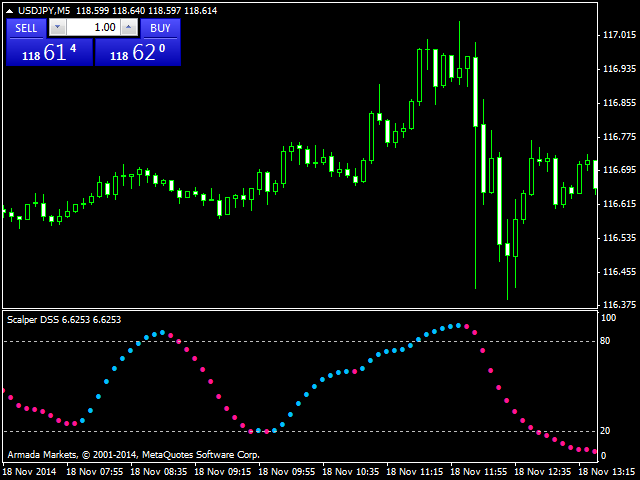 In summary, Scalper DSS is an indicator that will provide us with signals of purchase or sale in very low temporary spaces, M1 or M5, with the aim of having little profit per trade, but doing several trades during the day. If we do not want this short-term operation, increased time frames can be traded intraday, doing fewer trades but with more profit in each.

In short, it is an indicator that adapts to the needs of each trader and is suitable for any type of trader, whether novice or professional. You can find this indicator in the Mql market, in the indicators section, and you can buy it for 35 USD, or 15 USD if you prefer to rent it for a month. Additionally, you have a free trial version so you can evaluate it before spending the money.