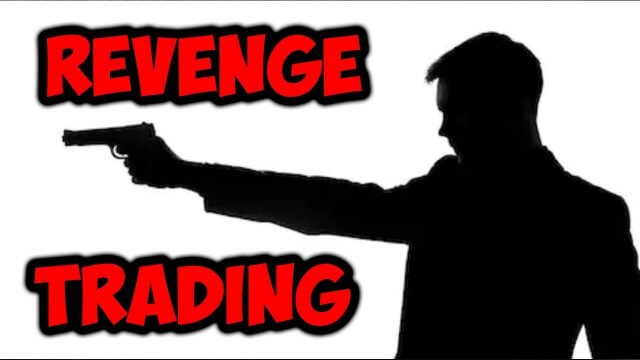 Revenge a dish best served cold. That is the old movie quote, but it doesn’t quite have the same meaning when we look at revenge in relation to forex trading. We all have losses, it is a major part of trading and something that you will experience throughout your trading career, no matter how good you are, you will have losses and most likely lots of them. What we don’t want to do when we do have a loss is to try and revenge trade, to try and win that money back, throwing all risk management out the window, and simply hoping that the next trade wins.

Revenge trading is a situation where your emotions are getting the better of you, they are taking over your thought process and you are trading based on your feelings rather than the markets and your analysis. It takes you away from your rules, it takes you away from your system, and shows a lack of discipline within your trading. We all get these feelings though, the important thing is that you do not act on them, remind yourself why you are here and avoid putting on those revenge trades.

When you decide to trade based on your emotions, you are pretty much just gambling, there is no real reason to why you are selecting certain trades, simply the fact that you want to make back any of the money that you previously lost. The usual form of revenge trading is when you make a trade take a loss, you then place another trade, usually in the same direction but this time with a larger balance size. We have set out some examples of typical revenge trades below.

Jack has placed a trader with $100 based on his analysis, it goes the wrong way and he is currently losing about $95 out of his $100 bet (it has a stop loss placed at $100 loss). Looking at the markets, he still believes that his initial analysis was correct, due to this, he decided to extend the stop loss down to $250, a few hours later that stop loss gets hit and he has now lost $250 instead of the original $100. This form of revenge trading simply creates more losses, he did not want to lose that initial $100, even though it was calculated into his strategy, and so instead he has over doubled the loss incurred.

Sarah has placed a $100 trade, it goes completely the wrong way and she is stopped out losing the entire $100. She is annoyed and so wants to try and win that money back, so she decides to place an additional trade, this one is for $200, double the original amount. Once again it goes the wrong way, this fuels her frustration and so a third trade goes on, this time for $400, another double of the amount. This can continue until going bust. Even if the second trade went the right way, it is often closed once the original amount is recovered, it is still a form of revenge trading and very risky, even if it gets the result that you wanted.

So we know that revenge trading is bad, we know it is something that we need to avoid and we know that it is a feeling that most traders feel at one point or another. So let’s take a look at some of the things that you can do to try and avoid it or to reduce those feelings if it does raise its ugly head.

Take a break: Go outside, do something that has nothing to do with trading. Sometimes all you need to do is to clear your head, get away from it and think about something else. When you come back after the break with a clearer mind, you most likely won’t have that regret and that desire to place larger or trades that are outside of your strategy.

Document and journal your trading: If you are keeping a trading journal or at least documenting each trade, you can use your information to work out why that original trade lost, this will give you a much better insight and can help reduce the desire to revenge trade, as you know what went wrong, you can use that in the future to improve your trading, it will also help you to realise that placing another target trade will be a bad idea as the reason for the loss in the first place is still present.

Trust your trading system: You have your trading system and you have it for a reason, you would not be using it if it did not have a proven track record or at least the potential to be profitable. If You trust in our plan then you will stick to it, if you do not trust in it then you should not be using it, either way, you should be sticking to your plan and understanding why understanding that any trade that is placed outside the rules f the system is bad trade and a trade that should not be made.

So that is revenge trading, you can probably see why it can be so devastating to your account, many traders have completely blown their accounts from doing it, but stick to the plan, stick to your risk management and take a break when things are getting a bit too much and you should be able to avoid such trades and to remain on your path to success.