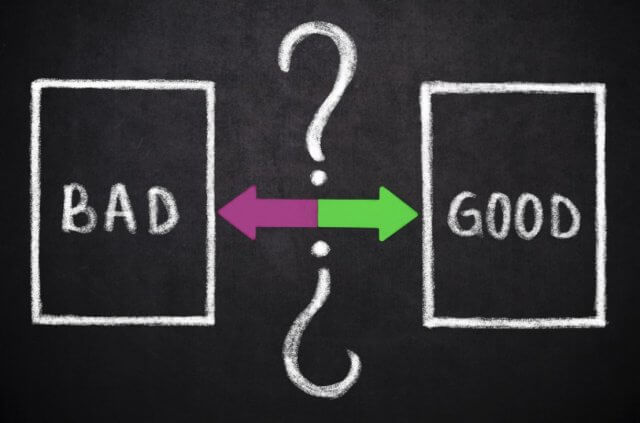 When you trade there are good trades and bad trades, from the outside this may seem obvious, but what is actually considered a good or bad trade is a little different from what you may think. If you were to ask most people, they would simply state that when you win it is a good trade and when you lose it is a bad trade. In relation to your account balance, this is pretty much true, a good trade will obviously make it increase. However, when we look deeper into a trade, this is not what defines a good or bad trade, instead, there are a number of different things that contribute to whether a trade was good and bad, and to find them we need to look deeper into how the trade was made and for what reasons.

So before we look at anything else, what would make a good trade? Well simply put, a good trade is a trade that follows all requirements of the trading plan, this includes the entries, exits and also the required risk management, regardless of the outcome, as long as it follows the correct criteria, it can be considered a good trade.

We mentioned earlier that even a winning trade can be a bad one, this sounds a little counterproductive as the overall aim of trading is to make money, so of course, a winning trade would be a good thing. Not quite, remember what we said about a good trade, it needs to follow the trading plan properly. Let’s imagine that your trading plan allows you to risk 2% of your balance on each trade, you put in a trade but the stop loss is a little lower or the trade size is a little higher than usual, this has increased your risk, so whether or not it goes on to win or lose, you have risked too much and it would now be considered a bad trade.

Other examples of bad trades include ignoring certain indicators that you may use, if you normally require the RSI to be at 80%, taking a trade at 60% or 70% would be considered a bad trade as you have gone against the planned trading strategy, again the outcome does not matter. A major downside to bad winning trades is that it can give you false confidence, it can make you think that your own opinion is greater than the strategy and this could potentially lead to further bad trades which will ultimately lead to losses.

There is a little hope when in a bad trade, there are ways available that can help get you out of them, for instance, if they are in profit, you can simply close them or add a trailing stop to protect it from going into losses, if it is currently negative then you will need to ensure that you do not lose more than the planned percentage of trade as outlined within your strategy. It is important that any changes you make to the trade are in fact going along with your trading plan and not an additional unplanned or bad decision. If however, it is past the stage of fixing, then it is important to use it as a learning point, and a reason not to make a similar trade in the future.

If there are bad winning trades, the three must also be good losing trades, these follow much the same idea as the bad trades, as long as they follow the trading plan, they can be considered a good trade. Trading is full of ups and downs, not every trade can be a winning one, your strategy was designed to take both wins and losses into account. Keeping to the strategy regardless of a loss is showing good discipline, and it is something to be proud of. Of course, having losing trades can make you question your strategy, but losses are a major part of trading and any strategy, so stick with it and those losses will soon be overshadowed by the wins.

So how do you work out whether your trade was a good one or a bad one? Well, you should be creating a trading journal. This is something that will detail exactly which trades you made, which ones were profitable, and the reasons behind each trade. You will be able to use this journal to see which trades you moved away from the planned strategy. It is important to use this as a learning and development tool, why did you move away from the plan and what were the results. The majority of the time, you will find that the bed trades have more sporadic results to them which the good trades are far more consistent. If you were to make a bad trade that made a loss, there is nothing worse, and you should use those examples as reasons why you do not want to do them in the future.

So have a think back to your last few trades, were they good or bad trades, if you performed some bad trades, try and have a look at why you did them. Trading is a long process and it will take mistakes to help you truly learn. It can be tempting to make some additional trades or to make your trades a little larger, but try to use the bad trades in the past to prevent you from making them in the future. Look at the bigger picture, you are here for the long haul and not for the quick profits that these bad trades could make.