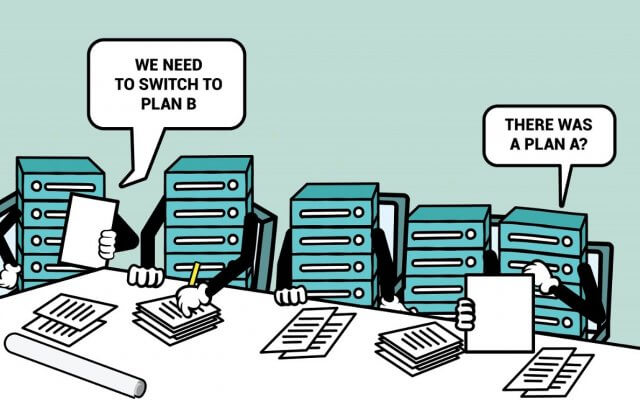 This is something that you have probably heard a lot of times before, it is one of the most used phrases in Forex trading and it is also one of the most relevant. When you break it down, it is simply reminding you that each trade needs to be planned, analysis needs to take place and the right entry/exit points found, once this has been down, you should put in the trade and then stick to what you had planned before, do not start fiddling with it mid trade and changing the stop losses or take profits, you had them set for a reason, so let it do its work.

Some people may say that you need to deviate from the plan in order to make the most profit or to avoid losses, those are the people who have not created their trading plan properly and so need to micro-manage their trades, with a proper plan it will be able to get on with it itself and any losses will be negligible due to the risk management put in place for each trade (part of the plan). Yes, flexibility is important, but that flexibility needs to come in the planning stage, not the execution.

Use a trading journal:

You have probably heard this a thousand times, use a journal to record everything that you do, not only does this give you valuable information about the trade but it can also be used as a way to check that you are in fact sticking to your plan. Looking through your trades, can you see anything that deviates from it, any moves stop losses or early closures? These are the things that you will be looking for.

Discipline is key, but also sometimes hard to maintain. Sometimes you have to deviate from the plan and it goes well, it may happen a second time and so you will start to believe that making these changes with each trade could lead to more success, that is until it all goes wrong and you start to bring in some losses. You may notice a trade that you made changes to and it did well,m but it is important to stick to your plan, that is your plan for a reason, its reason is that it works, so why change something that works in the long run just for some quick gains. Stick to that plan, if you have noticed something that may work better, test the plan with the changes on a demo account, use the same changes with every trade and see whether it is more effective or not while doing this maintain the current plan on the live accounts until a full analysis of the changes has been performed.

Find the justified and unjustified wins and losses:

It is quite easy to work out which of your wins and losses are justified, you created the detailed plan for the trade, and you stuck to it, that is a justified trade. This means that an unjustified trade would be one that you deviate from the plan, it may be a large change or it could be a little change like changing the stop loss by a few pips, it doesn’t sound like much but it can really make a difference.

Maintaining discipline is vital when it comes to making justified trades, your trading journal can often make it obvious when trade was unjustified, there will be a random change that cannot be seen anywhere else, it is important to work out why that change happened and why you deviated from the plan, a lot of the time you will not be able to recall and most likely did not record it. You need to stay disciplined, your plan is there for a reason, each trade has been justified with analysis and reasoning, do not change that partway through because you have a feeling or someone told you something else.

You have probably heard this a thousand times, stay consistent with your trading, and this is certainly relevant. Your plan was created and most likely had each trade following a very similar path, so stick with it, consistence can be in regards to things like stop loss and take profit distances, lot sizes used. Do not just start adding to the trade size because the previous trade lost, your plan should have been created with losses in mind, so staying consistent to it will bring in far more regular results than potentially damaging your account with sudden changes.

So the moral of the story is to plan your trades, then trade that plan.