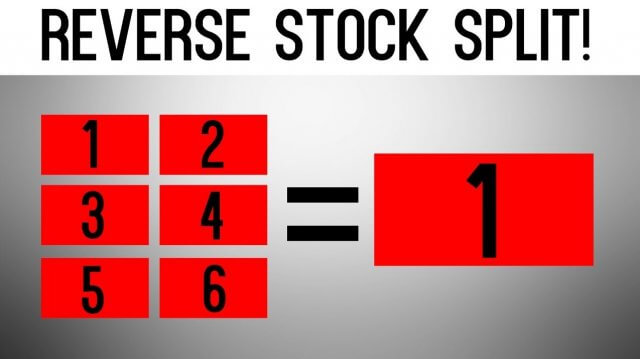 In the financial markets and in the stock market, there are different ways in which companies can manipulate their stock prices, including the reverse split of shares. Manipulation is not always bad. Sometimes, a company has legitimate reasons to change the price of its shares. But that’s not the case when what we’re dealing with is a reverse split in the world of penny stocks.

In fact, for me, it is not excessively important if a company manipulates their actions. Splits aren’t always bad, it depends on the company and why it’s doing it. However, I think it is wise to know well what a reverse split means does and why most penny stocks do it. So, let’s dig deeper into the reverse split of actions. We’ll look at some examples and look at whether they’re good or bad.

What is a Reverse Split?

A reverse split happens at the moment that a company decreases its share amount at the same time that increases the price of the same. A company cannot magically increase the price of its shares, this phenomenon is due to reverse split. Therefore, you have to “get rid” of the stocks to increase their price. As you see, they are simple mathematics.

It seems harder than it really is. Technically, the company doesn’t dispose of the stock, it just combines the existing stock. I’ll tell you what it means later. What does a reverse split mean for an investor? We need to keep in mind that traders and investors have different approaches to seeing markets.

Investors hold equity positions for an extended period of time, usually to obtain a slow and steady profit. Traders, on the other hand, enter and exit the positions of relatively fast action, for potentially faster profits. I have no mania for investors, but investing in the fraudulent stock companies I usually operate in is a very risky gamble.

I make this claim because many times, split is mainly applied to penny stocks. A large company with a price of $100 per share will normally not split: the price of its shares is probably already good. Technically, a reverse split means nothing to an investor: consider the keyword “technically”. I’ll talk about whether a reverse split is good or bad for a company’s shareholders in a short time, but first I wish to clarify something else.

Reverse split basically means nothing to an investor because the value of their position in the company does not change. It simply means owning fewer shares at a higher price. Is a reverse split good or bad for shareholders? Just because a reverse split is not significant to an investor doesn’t mean it’s a good thing. In fact, it’s usually bad news. That may sound confusing, so I’ll look at it. I’ve seen toxic companies do reverse splits for over 20 years. And it usually doesn’t end well.

Why? The reasons for the split must be analysed or divided. A large and reputable company with a stock price of $100 per share is probably financially stable. But a penny stock at a price of 50 cents a share probably isn’t as financially stable. In fact, the company may need to raise money through public offerings. But penny stock bids are often toxic and almost always end horribly badly.

Institutional investors do not want to invest in a company with a low share price with tons of negotiable shares, making it difficult for their investment to make money. Therefore, a company can make a reverse split to look more attractive to potential investors. It reduces the number of shares and increases the price, which greatly facilitates public offers. Public offers dilute the company’s shares and make the company less valuable over time. Reverse splits can be a way for a scam company to hide how toxic it is, usually, is a bad sign for the average shareholder.

How does a reverse split work? Let’s look at a super basic example:

Let’s say Company A has a share worth $100. Since the price of your stock is $100 and you only have one share, the company is worth $100. The total value of a company is usually based on the price of its shares and the stock count. This is known as market capitalization, about which you can read more here.

We have Company B with 10 shares, each stock with a price of $10. That company also has a value of $100. Therefore, the two companies have the same economic value., but their stock prices are different. If Company B wants to increase the price of its shares, it could do a reverse split. But this does not increase the value of the company.

It simply means that the company’s share price is higher. So, if Company B wants the price of its stock to be $100 per share, it would merge the existing 10 shares into a single share now worth $100. Of course, a company cannot simply split up. It has to be managed by its investors who have to approve the split.

Impact on the Reverse Split Market

Why Companies Do Reverse Splits

The inverse spits are fundamentally a remedy designed for companies to increase the price of their shares and try to attract investors. Sometimes it’s a way for companies to remain listed on a larger stock exchange.

This is another reason why reverse divisions can be bad news for shareholders. But really, if a company is doing a division to stay on the list, it already had clear problems before the division.

An example. A requirement to stay on Nasdaq’s list is that the price of the company’s shares must be above $1. In a letter from the SEC to Accentia Biopharma, (NASDAQ: ABPI) on the price of its shares in 2008:

“Market Rule 4310(c)(8)(E) states that Nasdaq may, at its discretion, require an issuer to maintain a price of at least $1.00 per share for a period exceeding ten business days in a sequential manner but normally not more than 20 business days in a row, before determining that the issuer has demonstrated a capacity to maintain long-term compliance”

This is part of the warning that the SEC issued to ABPI about keeping the price of its shares above $1 per share. If ABPI did not comply, it would be removed from Nasdaq. It was finally removed from the list. When companies receive such letters, they usually do a reverse split in order to comply with the requirement.

Do you see why reverse divisions are usually bad news for long-term investors? It may indicate the long-term failure of a company to consistently meet the quotation requirements of a major market, which is not good.

Calculator of a Reverse Split

So, you know a little bit more about reverse splits and what they mean, now I want to help you understand and show you what the calculus for the price of recent reverse split shares. It’s actually quite simple. When a company announces that it will do a reverse split, it also has to announce what that division number will be. Here is another theoretical example. The same concept applies to a real action that makes this type of division and we will cover some real examples later.

Let’s say Company A announces a reverse split of 1:10.

This means that 10 shares held by a shareholder-owned before the split, they will now have one.

Most stock prices will not be so simple: the price obviously will not always be a round number. In addition, each division is different. Some companies only do a reverse split 1:2, while others can do 1:30 or even 1:50.

In any case, just take the last number of the ratio and multiply it by the share price to find the price per share after the split of the company.

Examples of a Reverse Split

Let’s look at some real examples…

Many penny stocks do a reverse split at some point. Not all but many do.

Pro tip: Know how to calculate a reverse split.

Reverse share divisions can influence stock prices after the split.

Again, the division does not change the value of the company, but it may highlight any reasons of interest to the company. The main question right now would be, how can we find information about reverse splits or other relevant news in the stock world? Use a filter like StocksToTrade. Its new Breaking News feature alerts operators to the latest news, such as reverse splits.

Now, let’s look at some examples of reverse splits.

The reverse split of this action took place on June 11, 2020. I completely don’t know why XSPA made the decision to make a stock reverse split, and I won’t waste my time researching right now. If the action leaves good news and comes into play, that’s what I really care about.

This reverse split of shares occurred on April 2, 2020. It was actually a 1:26 split: 26 actions of action before division became an action after division. That’s a pretty big jump. Think how a few days after the reverse split, the shares had a giant volume and had a massive move of around $16. This is quite common with the reverse split but does not mean that it always happens.

Remember, many fraudulent companies use reverse split as a way to participate in toxic funding. That usually means they will increase the price of their shares to raise money. That is usually clear from the candle on the daily chart. In the case of SONN, it peaked at over $16 the day news came out, before falling below $10. It would not be strange if SONN had released many of his actions in that movement.

This action was split on April 15, 2020, only a few days before its massive execution to approximately $19 per share. But like SONN, CYCC seems to have been involved in some toxic funding. Watch carefully the candle that corresponds to the day of its execution. The great wick shows how high it arrived before falling to new lows in the day.

Most likely, CYCC had shares it wanted to release, so it released a juicy press release to generate some enthusiasm. This is an added reason why you should not believe the hype that some news has.

It’s okay to operate on these moves, don’t get me wrong. But many of these companies launch news to raise their short-term stock prices. That is why it is advisable to get in and out of these operations quickly.