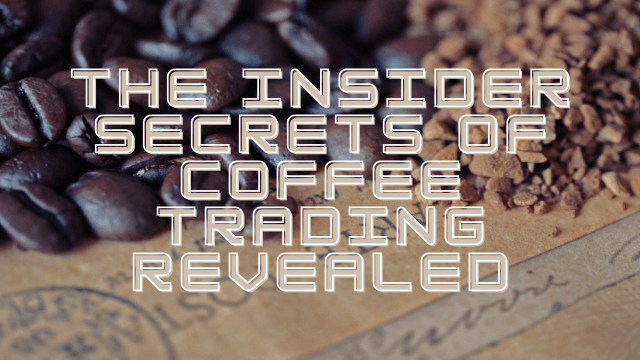 There are two main types of coffee: Robusta and Arabica. Coffee is marketed under the ICE Futures contract in the U.S. It is Arabica. Robusta coffee beans are considered more bitter and also contain more caffeine.

History of the Coffee Trade

The International Coffee Organization reports on international coffee production and sales statistics and is a good promoter of coffee trade among nations. This organization is based in London, the ICO is composed of 55 member countries that produce and consume coffee and offers coffee futures traders a good deal of data and other information.

The Agricultural Foreign Service of the US Department of Agriculture also provides a wealth of information and statistics on coffee, including country and world production data, import and export data, etc. The various exchanges that trade in coffee futures also have a lot of information.

The contemporary history of the coffee market and its prices can be summarized in two periods: the period regulated by the International Coffee Agreements (AIC), from 1963 to 1989, and the subsequent period of free market, which followed the breakdown of the AIC negotiations in 1989.

The collapse of the 1989 Agreement was disastrous for many along the supply chain, as the International Coffee Organization (OIC) composite coffee target price fell by almost 75 percent in the following five years, from $1.34 per pound in 1989 to an average of $0.77 per pound in 1995.

During the regulated period, the average price difference between Arabica and Robusta was about $0.149 per pound. An annual peak of $0.475 per pound was recorded in 1986, following a shortage of supplies to Arabica following a drought in Brazil in 1985.

But why is coffee important to merchants?

With more than 2.2 billion cups of coffee consumed daily, coffee beans are one of the most commercially traded soft commodities in the world. Today, the coffee market is worth more than $100 billion annually. With growing demand, it has become one of the most interesting, albeit volatile, investment tools for trade. While some use futures and coffee options to cover their portfolio, others speculate.

Coffee is derived from a plant grown in more than 50 countries, all with tropical and subtropical climates. Brazil is the main producer, providing around 35% of the coffee grown in the world. The other main producers include Vietnam and Colombia.

Coffee futures and options are negotiated in New York on the Intercontinental Exchange (ICE, formerly the New York Board of Commerce) through CFDs.

The months of March, May, July, September, and December are the months of the coffee futures contract.

The equivalent to this contract for coffee futures is approximately 10 metric tons.

The prices of coffee futures are quoted in US dollars per metric ton with a minimum price movement of $1 per ton or $10 per contract.

Other international exchanges trading in coffee futures include the Singapore Commodity Exchange (Robusta), the Commodities and Futures Exchange (Arabica), and the Tokyo Bean Exchange (Arabica coffee and Robusta coffee), and (BM & F) in Brazil.

The largest coffee importers are the United States, the European Union, Japan, Canada, and South Korea. Global grain consumption continues to grow at a constant annual rate of over 2 percent, and artisanal coffee shops are rapidly consolidating into the retail business of modern society.

As an important staple of the diet, this agricultural product has generated a large economy of its own. Only in the US, the economic impact of coffee exceeds $220 billion and represents approximately 1.65%  of the country’s total GDP. The coffee industry is estimated to represent 1.7 million jobs in the United States. Thus, the prices of coffee commodities have a determining role in the global economy.

Is Coffee a Good Investment?

Like any other asset, the coffee trade offers no guarantee of financial success. For years, however, this agricultural product attracted the attention of international investors and traders seeking to add substantial growth and diversification to their portfolios.

Why trade in coffee?

There are several important reasons to trade in coffee, however, the most common are the following:

The presence of coffee in a capital-only portfolio may reduce volatility due to the absence of a correlation between this commodity and other asset classes.

Raw materials can serve as a safe haven in times of global economic uncertainty and market turbulence, providing operators with protection against inflation and the fall of the US dollar.

Commodities could be very volatile, experiencing strong price swings. Trading in coffee CFDs is a way of trying to take advantage of the drastic fluctuations in the price of silver. Operating with coffee requires some consideration, due to the occasional high volatility of the market and the wide range of instruments available, from coffee derivatives, futures, and options, to the shares of those companies that are dedicated to this industry.

One way to invest in the coffee industry is to buy shares in a company that produces or sells the product. The shares of these companies are strongly influenced by the coffee market and can offer a good value compared to the trading of the commodity itself. Of the countless companies in which one can choose to invest, a few names dominate the industry.

Expert operators often suggest investing in more than one company in order to cover their bets and avoid having all the eggs in one basket. Another way to protect against potential risks is to buy shares in a company whose product portfolio includes more than just coffee so that its return does not depend too much on the raw material.

The reasoning is always the same: the proximity of the winter cold. In the case of the future of coffee, a freeze or threat of freezing in Brazil could be as serious as to damage coffee plantations and reduce coffee production, perhaps for several years, may have a substantial impact on raw material prices due to Brazil’s dominant role in the world coffee market. Depending on the situation of coffee supply in the world, some traders insist on shorting with coffee after May, looking towards the southern hemisphere winter season. However, this seasonal trend is not very strong because other countries, such as Mexico, can source coffee.

The most recent estimates indicate that global production would be around 169.1 million sacks (-3.1% annually), mainly marked by lower production in Brazil (-8.5%), which will enter its biennial valley-year. The other producers would keep their production virtually unchanged: Vietnam (29.1 million bags); Central America (19); Colombia (14.3); and Indonesia (9.5).