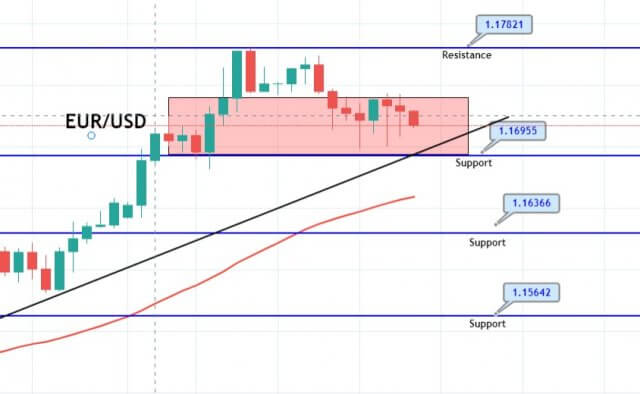 The EUR/USD failed to continue its early-day strong bids and dropped to 1.1711 level even after the upbeat German data showed that the export expectations for Europe’s economic powerhouse improved sharply in July re-opening of economies. However, the reason for the losses in currency pair could also be attributed to the broad-based U.S. dollar strength, triggered by geopolitical tensions and hopes that policymakers were close to a result over the next U.S. fiscal stimulus package, which contributed to the currency pair gains. At the moment, the EUR/USD currency pair is currently trading at 1.1710 and consolidating in the range between 1.1708 – 1.1774.

However, the currency pair buyers seemed cautious to place any strong position ahead of the C.B. Consumer Confidence, which is due to release on the day. It is worth recalling that the “Export expectations in Europe’s largest economy rose to 6.9 points in July from -2.2 the previous month.”

At the US-China front, the tussle between the US-China got an additional burden after China ordered the closure of the U.S. office in Chengdu, a tit-for-tat reply for the United States’ previous move over the Chinese office closure in Houston. In the meantime, the U.S. is increasing its aerial surveillance over the South China Sea to a record level to keep watch on China.

As per the keyword, “Spy planes from the U.S. navy, air force and army are involved in an apparent three-pronged drive to track Chinese submarines and monitor activity by the People’s Liberation Army (PLA), which has redoubled training for operations aimed at Taiwan”. Further added, “In Beijing, procurement documents from the China State Shipbuilding Corporation have revealed plans to build an amphibious assault ship ideal for island invasion”. However, these statements instantly escalated tensions between both countries.

At the coronavirus front, the latest number of coronavirus infections has crossed almost 16.30 million, whereas more than 650,000 people have died globally, as per the Johns Hopkins University. Whereas, the California coronavirus cases increased by at least 10,549 on Monday to 463,439 total, which now crossed the record of Massachusetts in total COVID-19 deaths. Australia’s no. 2 populous states of Victoria also reported 384 new cases on the day vs. 532 previous day’s surge. In contrast, New Zealand has reported zero cases of Covid-19 for the 3rd-day in a row.

Despite all these concerns, the equity market flashed green, possibly due to optimism over a potential vaccine for the COVID-19. The reason for the risk-on market sentiment could also be attributed to the hopes of the U.S. $1 trillion packages. The U.S. Senate Republicans introduced a $1 trillion COVID-19 aid package that would include $1,200 payments to U.S. citizens, as well as incentives for the manufacturing of personal protective equipment in the United States rather than importing them from China. This package also included $190 billion in loans for small businesses and $100 billion in loans to businesses that operate seasonally or in low-income areas. However, these hopes kept the equity market positive on the day.

The EUR/USD is trading at 1.1728 level, holding above resistance to become a support level of 1.1715. On the hourly timeframe, the EUR/USD was previously forming highers high and highers low pattern, but now the recent cycle seems to change the trend. A bearish breakout of 1.1715 can drive more sales until the 1.1683 level. On the higher side, the resistance can stay at 1.1780. Checkout a trading plan below…