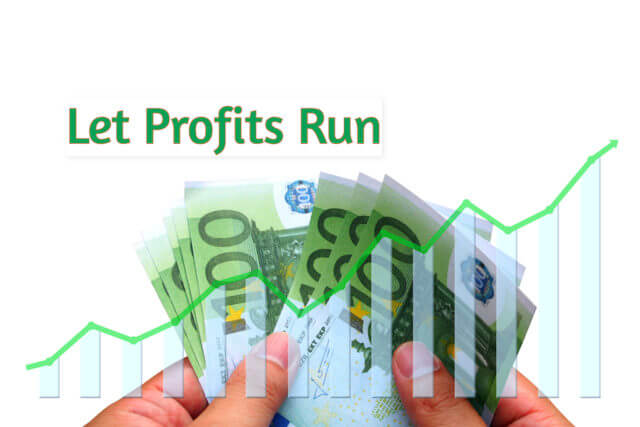 There is a saying in the financial market, “Cut your losses short and let your profit run.” Letting the profit trade run is not as easy as it sounds. Traders try to do it in many different ways, such as taking partial profit, using a trailing stop, etc. Both are very handy, but traders are to use them sensibly.

At the time of entering a trade, a trader has to determine the next level of support/resistance (take profit) at where the price may lose its momentum. If the price hits the level, he gets the reward. The length difference between the entry point and the support/resistance (stop loss) is the risk. The risk and reward ratio shall be at least 1:1. The more, the better it is.

Let us think of an example. A trader is about to take a long entry. He measures the next level of resistance offers enough space for the price to travel towards the upside. The price reacts at a level of support and is about to produce a bullish reversal candle. Let us assume the Risk-Reward ratio is 1:1, which he is happy with. He takes the entry, and the price heads towards the direction according to his anticipation. The trend looks strong, and he decides that he would let the trade run.

Traders can do it in many ways. Let us get acquainted with two popular ways to do it.

Trailing Stop Loss: Though his initial calculation offers him a 1:1 risk and reward ratio, he sets Take Profit far away. He makes sure that he sets Stop loss where he planned before initiating the trade. Once the price has gained some profit, he shifts the Stop Loss along with the price by having enough gap. This is how he gives himself a chance to grab some extra pips.

To do that accordingly, minor time frames may be used to spot out support level. Using trailing Stop Loss is not always that rewarding. However, if it works well, it may give you a huge return.

Taking partial profit: Taking partial profit is another way that he can let his profit run. Once the price is at the first resistance, he shall take half of the profit; let the rest of it run and shifts the Stop Loss at the breakeven point. This means he has free trade, which does not have anything to lose. He has already taken some profit (50%) out. Let us assume that the first resistance level gets broken and the price heads towards the second resistance level. What does he do?

Think for twenty seconds, what would you do?

He takes some part of the profit again, shifts his Stop Loss up, and lets the rest of it run. This is what he keeps doing with at least 10% of his original trade until the Stop Loss gets hits by the price.

If a trader can do it accordingly, he maximizes his chances to grab some extra pips. Both of them need a lot of practice. Backtesting, demo trading, or letting a very tiny part of the profit, such as a 5% run, can help us learn the art of taking partial profit.