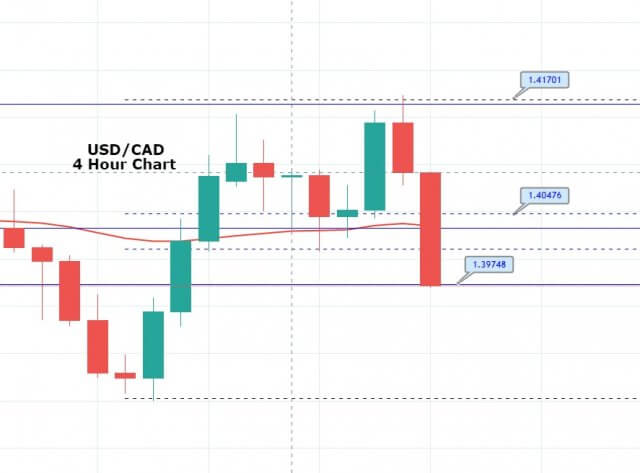 Earlier today, the NZD/USD trading signal got into losses and closed at stop-loss, costing us 60 red pips, even before we could update about its setup. The market is quite uncertain today and moving sideways without any clear setup. Anyways, now let’s take a look at the USD/CAD pair as it’s been on the move since the U.S. session has begun.

A day before, the USD/CAD pair was closed at 1.41447 after placing a high of 1.41569 and a low of1.40226. Overall the movement of the USD/CAD pair remained bullish throughout the day. The pair USD/CAD posted dips during the Asian and European sessions following the reports of U.S. crude oil inventories showed a rise and reignited the oversupply concerns and hence affected the crude oil prices.

According to the American Petroleum Institute, the stockpiles of crude oil last week raised by 8.4Million barrels, which was more than the expected.

Despite such inventory data, crude oil is making a bullish movement, causing a downtrend of USD/CAD was the report of Non-Farm Payrolls from the US ADP on Wednesday.

The drop of more than 20 million jobs fell under the expectations and helped the U.S. dollar to pick up the pace. Strong U.S. dollar across the board added in the upward movement of USD/CAD pair and took its prices near 1.4157 level.

In the absence of any macroeconomic data from Canada, the pair USD/CAD relied on the U.S. dollar and crude oil prices on Wednesday. At 19:30 GMT, the Crude Oil Inventories from Energy Information Administration for last week showed that inventories dropped to 4.8M from 8.5M of expectations. The U.S. dollar was also strong on Wednesday due to the easing of lockdown measures across the globe, and this added in the rise of USD/CAD prices.