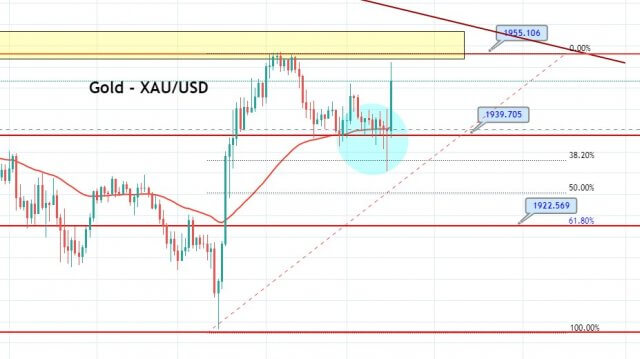 The precious metal gold prices were closed at 1953.90 after placing a high of 1954.86 and a low of 1902.53. Overall the movement of gold remained bullish throughout the day. After posting losses remaining flat from 3 consecutive days, gold prices rose on Wednesday by 2% on the back of US dollar weakness on the eve of a speech from the Federal Reserve Chairman Jerome Powell. Investors were betting on a further stimulus package to diminish the impact of coronavirus pandemic.

The US dollar was weak on the board as the traders were placing bids on the hopes and expectations that there was a further stimulus to come. The US Dollar Index (DXY) eased by about 0.1% against the six major currencies basket and made gold cheaper for investors holding other currencies. The Chairman of Federal Reserve, Jerome Powell, will speak at a virtual Jackson Hole symposium on Thursday, at the central bank’s annual Monetary Policy Framework Review.

The speech is highly awaited because investors believe that it will make a case for stronger monetary stimulus to help the economy. The speech will also give clues about Fed finding additional ways to bolster the economy if Congress fails to deliver on a new pandemic relief package.

Ahead of the September monetary policy meeting of Federal Reserve, the question remained on cards that whether Powell will favor shifting inflation target to an average instead of the long-favored 2% level. It is because such a shift will allow inflation to run higher before interest rates increased. In this situation, the US dollar will become weak, and gold will gain.

The Fed Chair’s speech’s rising dovish expectations on the next day weighed on the local currency and helped bullions to post gains. However, if Powell will deliver the expected comments, then gold could quickly recapture the $2000 level this week.

On the other hand, the gold prices were further supported by the rising safe-haven appeal after the US & China’s escalated tensions. On Wednesday, the US penalized 24 Chinese companies, and the Trump Administration cut them off from the American market, saying that they had contributed to China’s controversial island-building campaign.

The companies were added to the government list that bans them from buying American products. The reason was provided as their role in helping the Chinese military to construct artificial islands in the disputed South China Sea.

On the vaccine front, the top US virus expert Dr. Anthony Fauci warned against rushing out a COVID-19 vaccine before proven effective and safe. He said that it could hurt the development of other vaccines.

US President Donald Trump has been considering plans to put out a vaccine before it has been fully tested because a move like this would increase his chances of re-election in November’s presidential election. Democrats have accused Trump foe being prepared to endanger American lives for political gain.

The warning by Dr. Fauci faded some of the risk appetites from the market and added in the gains of gold prices on Wednesday.

Meanwhile, the gains in yellow metal were checked by the positive economic data from the US. At 17:30 GMT, the Core Durable Goods Orders rose in July to 2.4% from the expected 1.9% and supported the US dollar. The Durable Goods Orders in July also rose to 11.2% from the estimated 4.4% and supported the US dollar. The better than expected US economic data on Wednesday caped additional gains in yellow metal prices.


The precious metal gold soared sharply after testing the support level of 1,902 level to place a high around 1,955. The precious metal has closed a bearish engulfing candle on the 4-hour timeframe and may drive selling bias in gold. Gold can drop until 38.2% Fibonacci retracement level, which stays at 1,934 and 61.8% Fibo level of 1,922. Resistance stays at 1,954 and 1,965. The market is currently trading with massive volatility amid Fed Chair Pawell’s speech. Since our trade is closed at stop loss, let’s wait a bit for the market to gain stability before taking the next trade. Good luck!