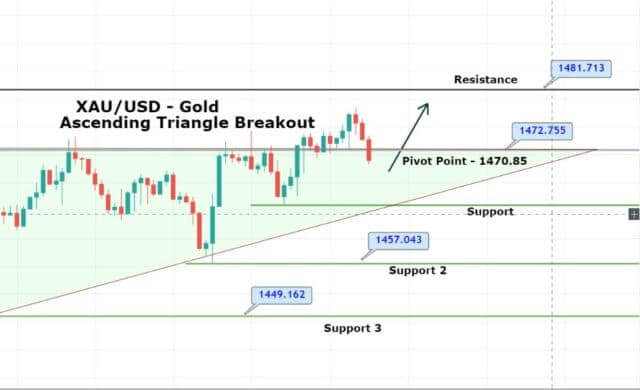 On Wednesday, the precious metal gold prices soared to their peak levels in nearly two weeks as U.S. Senate activity on Hong Kong produced a likely obstacle to a trade deal between the United States and China, bending demand for riskier assets.

The Chinese news outlet Global Times reported that U.S. & China had a long way to go to end the trade dispute and to come to terms.

CNBC reported on Monday that China would wait for the outcomes of 2020 U.S. Presidential elections before signing a trade deal. It was also said that China appeared to set on “wait till Trump out” rather than focusing on the Phase-one deal.

The phase one deal was highly skeptical from the beginning due to red lines of enforcement mechanism, Intellectual properties, and subsidies. Trump, on Tuesday, in response to the Chinese reluctance to sign the deal, gave threats to China that he would impose more duties on Chinese goods by 15 December if the phase-one deal was not signed by then.

Gold extends to trade in a bullish trend at 1,474 levels in the wake of U.S. China trade risks. On the 4 hour graph, the yellow metal has violated the ascending triangle, which was extending hurdle to gold around 1,472 area. Now, this level is working as a support.

Gold prices still hold over 50 EMA, which is expected to support it near 1,470 marks. The recent bearish trend in gold is likely to from three black crows pattern on gold, which may lead to gold prices below the 1,470 level and even towards 1,466. That’s where we can expect to take a buying trade today. Good luck!