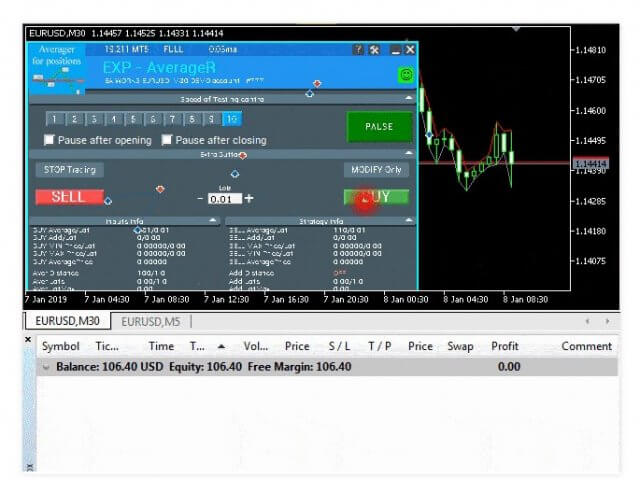 EXP Averager is an Expert Advisor that was published on the mql5 marketplace back in December of 2013. The developer, Vladislav Andruschenko last updated it to version 19.802 in August of 2019 and remains responsive on the comments page.

This EA was created to average deals that have had a drawdown and gone against the trend. It can also open additional positions that go with or against the trend with a general trailing stop. It works by opening a position in the same direction with the volume equal to lots from the previous deal whenever a specified number of points equal to the distance, modifies the general take profit and stop loss on deals when the price breaks the zero-line point for each.

Traders can also set the maximum number of positions that can be opened for averaging. Note that this EA doesn’t make automatic trades – it simply monitors and averages deals made by the trader in the case of drawdown until the trader received a profit. The system works with the popular MetaTrader 4 platform and the author also provides a similar MT5 version.

EXP Averager can be rented at a rate of $10 for 3 months or $20 for a year. The EA can also be purchased for $30 USD with 10 activations. This is a good price for this type of product, although traders should remember that it doesn’t support fully automated trading.

EXP Averager was designed to monitor manual trades and to make a profit for the trader in the case of drawdown by averaging those positions. It is available for a fair price, but we were still curious as to how this product is regarded amongst users.

We found the following comments to be helpful:

“Works excellent in 90% of the time, except when you get an aggressive trend of 1000 pips against your position.” -Laurentiu

“What an amazing utility…Vladislav is very responsive as is evident from the new enhancements that keep on rolling for this utility….every trader should have this tool.” -noshali

Traders will need to ensure that they are satisfied with the fact that this isn’t a fully automated EA, and that more effort is needed on their part than what would be needed with other trading robots. If manual trading isn’t an issue, then this EA can certainly help to reduce losses incurred on the trader’s behalf.

This Forex service can be found at the following web address: https://www.mql5.com/en/market/product/1289