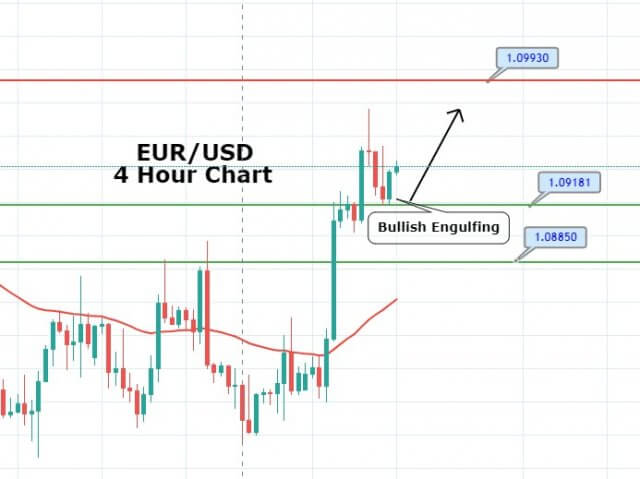 After gaining almost 100 pips at the start of the week, the EUR/USD pair rose to near its highest level in 2 weeks of 1.0976 level on Tuesday. The upbeat market mode was derived by the Franco-German recovery fund proposal, which was announced and provided a boost to the single currency EUR.

The Vice President of the European Commission, Valdis Dombrovskis, said that the European Stability Mechanism (ES) strongly supported the Franco-German proposal. Commission was also looking forward to presenting the proposal in the upcoming European summit on the 27th of May.


The technical outlook for EUR/USD pair seems bullish as the pair is trading at 1.0938, having formed a bullish engulfing pattern above an immediate support level of 1.0918 level. On the 4 hour timeframe, the pair is also forming a higher high and higher low pattern, which can drive further buying trends in the EUR/USD pair. The MACD is bullish, while the 50 EMA is also supporting the bullish bias among traders. The pair has the potential to trade towards north to target 1.0993 triple top area while support holds at 1.0918 and 1.08850 level today.