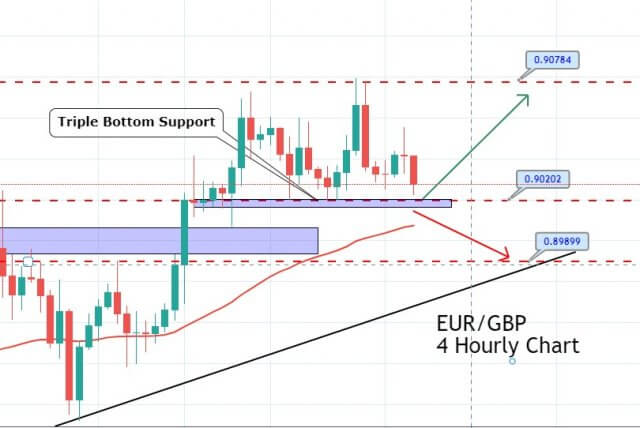 The EUR/GBP pair is trading at 0.9028 level, holding above the triple bottom support area of 0.9020 level. Overall, the EUR/GBP is trading with a bullish bias, both from fundamental and technical perspective. For instance, the headline IFO Business Climate Index was improving to 85.0 against 79.5 previously. While, the Current Assessment sub-index was arriving at 84.0 this month, while the IFO Expectations Index – indicating firms’ projections for the next six months – is likely to come out at 87.0 in the reported month vs. 80.1 last.

Looking ahead, the big surge in the data will likely bolster market expectations toward faster recovery in the Eurozone’s largest economy, which may provide support to the shared currency. As we know, the economic activity has already recovered slightly since the March crash. As the Manufacturing and service sector activity improved in Germany in June, it showed in the preliminary PMIs released on Tuesday.

One of the reasons behind a slight bearish bias today is that coronavirus remains a risk, said by the German Health Minister Jens Spahn, while speaking to broadcaster ARD on Wednesday, which eventually undermined the shared currency and contributed to the pair declines. As per the Jens Spahn, “we see that if we make it too easy for this virus, it spreads very, very quickly again even all over the world, we do not only see the relaxing attitude in Guetersloh – we’ve also seen it in Goettingen, in Leer, in Bremen and at churches and family celebrations.”

While the number of confirmed coronavirus cases increased to 191,449 with a total of 8,914 deaths so far, the cases rose by 587 in Germany on Wednesday against Tuesday’s +503, and the death toll rose by 19 as per the German disease and epidemic control center, Robert Koch Institute (RKI), on Wednesday.

The EUR/GBP pair early-day gains could be associated with the report that President Emanuel Macron and Dutch Prime Minister (PM) Mark Rutte made some progress on the talks over the European Union budget and recovery fund in the Netherlands which initially underpin the shared currency and provided support to the major during the early Asian session on the day.

Looking forward, the trader will keep their eyes on the German IFO Business Climate and pandemic updates for fresh impetus. As well as, Fed speech could offer additional directions for the pair.


On the technical side, the EUR/GBP is gaining support above 0.9020, and the closing of candles above this level can drive buying in the pair. Lagging indicators like the 50 periods EMA also suggests the bullish bias and extend support at 0.9007. However, the lagging indicator 50 periods EMA is suggestings odds of a bullish bias. Here’s a quick trade plan for the day.