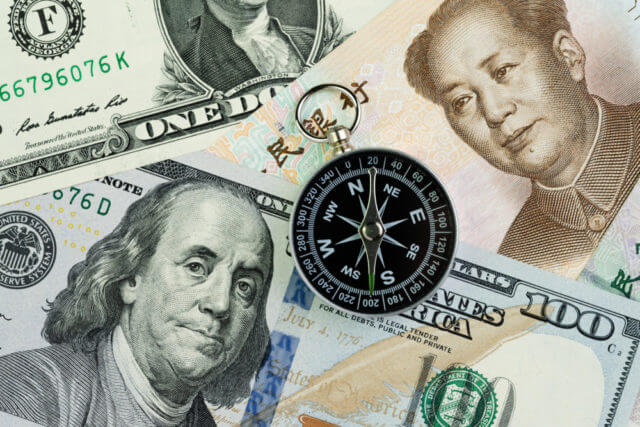 The United States and China trade deal optimism supported the risk-on markets and came to a massive increase in the US Treasury yields, sent the greenback higher.

A report came that both countries decided to cancel some existing tariff if the round-1 trade deal happened on a positive outcome. It should be noted that the United States’ ten-year yields increased from 1.80% to 1.97%. This is the highest level since August 1.

The EUR/USD currency pair remains to flash red and dropped for the 4th-consecutive day but didn’t hit below the 50-day average level. Moreover, the bullish trend could be seen in the pair because the Treasury yields are increasing in the wake of mild losses in the US dollar index futures.

As we all well aware, the shared currency faced many selling pressure yesterday, as anticipated, and fell near the 50-day average range at 1.1038. The US Treasury yields increased, sent the US Dollar higher, due to the fresh United States and China trade optimism.

A report came that both countries decided to cancel some existing tariff if the round-1 trade deal happened on a positive outcome. It should be noted that the United States’ ten-year yields increased from 1.80% to 1.97%. This is the highest level since August 1.

Currently, the futures on the S&P 500 are reporting a 0.18% decline, and the United States ten-year yield is seen at 1.91%, down 6-basis points from Thursday’s high.

On the flip side, the German trade balance and the US Michigan Consumer Sentiment Index are scheduled to release and will likely leave an impact on the EUR/USD pair. As well as, the China trade data fro October release during the Asian trading hours represented declines in the imports.

The EUR/USD is consolidating with a bearish bias since it broke the bullish trendline support around 1.1125 area. On the 4 hour timeframe, the pair has formed strong bearish channels, which are signaling chances of further selling in the market.

At the moment, the EUR/USD is focusing on a crucial trading level of 1.1060 level, which is likely to determine the further direction of the pair. Below this level, the EUR/USD may gain support at 1.1040 and 1.1010 level today.

The GBP/USD currency currently flashing green, but the overall sentiment remains bearish. As of writing the GBP/USD currency pair presently trading at 1.2822, having increased just more than ten pips a few minutes ago because the banks of England’s monetary policy decision has calm down now.

The main reason behind the GBP/USD currency pairs bearish sentiment is that the monetary policy decision by the bank of England. The rates hit the weakest level since September 24 at 1.2793 due to the Bank of England MPC maintained the interest rates, whereas two members of Bank of England voted for a rate cut.

The wary comments from the Bank of England Governor Carney also hurt the GBP. He warned during signaling the risk of a global economic downturn that there would be losses in jobs and business closure in the wake of no-deal Brexit.

On the other hand, the United States and China trade deal optimism supported the risk-on markets and came to a massive increase in the US Treasury yields, sent the greenback higher. So, the GBP/USD currency pair also was seen at the bearish track due to the rise in demand for the US dollar.

The GBP/USD hasn’t improved enough as it extends to trade sideways ahead of the Bank of England policy decision. The MACD and RSI have crossed below 0 and 50, respectively, suggesting the chances of a bearish trend in the GBP/USD. But the thing is, investors are staying out of the market ahead of BOE rate. On the downside, the GBP/USD may see next support around 1.2786, and the violation of this level can extend sell-off until 1.2690.

The USD/JPY currency pair is flashing green even after the positive Japanese data and the risk-on sentiment in the equity markets. As of writing, the USD/JPY currency pair is currently trading at 109.35 and consolidates in the narrow range. By the way, the pair hit the high of 109.49 during the overnight trade. Notably, the pair gained its15-pips in the last few minutes.

As of data, Japan’s Household Spending surged 9.5% year-on-year in September, crossed the expected rise of 7.8% by a big margin and up significantly from the preceding month’s 1% rise. Labor Cash Earnings also rose 0.8% in annualized terms, bettering the 0.4% estimate.

However, the Japanese yen is not supportive, mainly due to the fears that the buyers spent more ahead of the October tax hike. Notably, the spending had increased by 7.2% in March 2014, month ahead of the prior sales tax increase, only to fall sharply and stay negative for more than a year.

According to the forecasting view, the USD/JPY currency pair will likely keep its tracking the action in the primary equity markets and US Treasury yields. The ten-year yield increased to 1.97% in the overnight trade since 3-months highs. China’s trade data may also affect the demand for the Japanese yen.

On the technical side, the USD/JPY currency pair had shown the wrong direction to the buyers of the market during the last 48 hours as you know the pair dropped in 48 hours against the buyer’s expectations. The pair closed above the 200-day MA on Tuesday to fall back below the long-term MA in the overnight trade. Consider staying bullish above