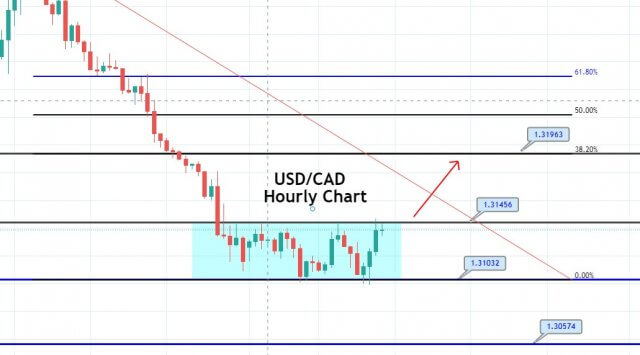 Today in the early European trading session, the USD/CAD currency pair extended its previous session recovery rally and remains bullish around 1.3144 level, mainly due to the broad-based U.S. dollar strength, backed by the risk-off market mood. However, the reason for the prevalent risk-off market sentiment could be associated with the reports suggesting that the U.K. pharma giant, Johnson, and Johnson, stopped its COVID-19 vaccine trial due to an unexplained illness. This, in turn, underpinned the safe-haven U.S. dollar and contributed to the currency pair gains. The on-going uncertainty over the American stimulus package also weighs on the market risk-tone, which gives further support to the U.S. dollar and keeps the currency pair higher.

Petroleum Institute data becomes the factor that capped further upside momentum in the currency pair. However, the bullish sentiment around the crude oil prices was being supported by optimism over U.S. President Donald Trump’s negative status for the pandemic. Currently, the USD/CAD is trading at 1.3115 and consolidating in the range between 1.3108 – 1.3144.

However, the market trading sentiment failed to extend its previous day bullish moves and remained depressed by combining factors. Be it the worrisome headlines concerning the Brexit or the tension between the US-China, not to forget the coronavirus woes in the U.S. and Europe, the market trading sentiment has been flashing red since the day started, which ultimately keeps the safe-haven assets supportive on the day.

As per the latest report, the U.K. pharma giant, Johnson and Johnson, delayed its COVID-19 vaccine trial due to an unexplained illness. Moreover, China’s dislike of the White House arms sale to Taiwan and the recent ban from Beijing to use Aussie coal for power stations adds additional pressure around the market sentiment.

This, in turn, the broad-based U.S. dollar succeeded in gaining positive traction on the day. However, the U.S. dollar gains seem rather unaffected by the political uncertainty in the U.S. ahead of U.S. elections. Thus, the gains in the U.S. dollar become the key factor that kept the currency pair higher. Whereas, the U.S. Dollar Index, which tracks the greenback against a bucket of other currencies, rose by 0.11% to 93.207 by 10:04 PM ET (2:04 AM GMT). However, the bullish sentiment around the crude oil prices could be associated with the positive reports suggesting that the U.S. President Donald Trump’s negative status for the virus infection.

The USD/CAD pair is trading sideways within a narrow trading range of 1.3145 – 1.3103 level, which marks double bottom and double top level on the 2-hour timeframe. A bullish breakout of 1.3145 level may lead the USD/CAD price towards the next resistance area of 1.3207 mark, while on the lower side, the support is likely to be found around 1.3040 level today.