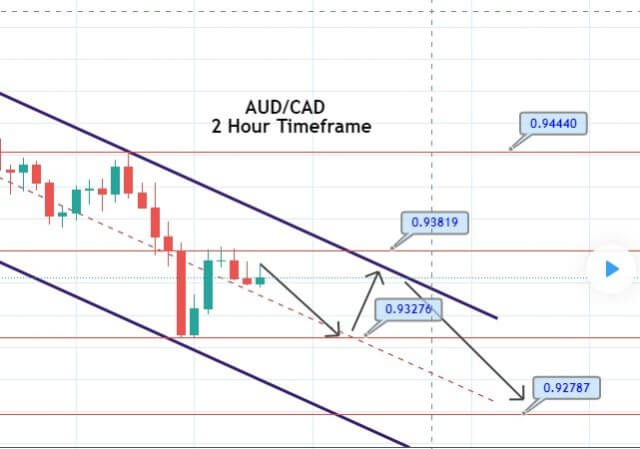 The AUD/CAD failed to extend its early-day modest gains and edged lower around the 0.9362 level. However, the bearish sentiment around the currency pair could be associated with the on-going tussle between the US-China and stimulus deadlock in the U.S., which leads to the decline in U.S. stock’s future. This, in turn, undermined the perceived risk currency Australian dollar and contributed to the currency pair losses. The acceleration in the coronavirus (COVID-19) wave 2.0 also played a major role in undermining the market trading sentiment, which added further burden around the Australian dollar’s perceived risk currency and dragged the currency pair low.

On the contrary, the weaker crude oil prices, triggered by the combination of factors, tend to weaken the demand for the commodity-linked currency the loonie, which becomes the factor that helps the currency pair to limit its deeper losses. The AUD/CAD currency pair is currently trading at 0.9362 and consolidating in the range between 0.9357 – 0.9386.

Intensifying restrictive measures such as lockdowns and curfews in Europe and the U.K. to control the 2nd-wave of coronavirus outbreak pushed global equity markets down. As per the latest report, the daily new cases increased past Thursday’s record level of 6,638, with 7,334 new infections leading to 348,557 total counts. The death toll seems to ease from the previous day’s 33 to 24 while marking a total of 9,734 fatalities. Apart from this, the U.S. policymakers’ inability to offer the much-awaited COVID-19 stimulus also played its major role in weakening the market trading sentiment, which in turn exerted some additional pressure on the perceived riskier Australian dollar and contributed to the currency pair losses.

Elsewhere, the intensifying tensions between the U.S. and China added additional burdens around the global trading market. The tension between the world’s two largest economies fueled further after China aggressively warns the U.S. to step back from Taiwan Strait. However, these lingering Sino-US tensions kept challenging the risk-on market sentiment and contributed to the currency pair losses.

Access the pond, the reason for the downbeat market trading sentiment could also be associated with the latest report suggesting that the World Health Organization (WHO) said that the previously cheered corona-vaccine from Gilead Sciences Inc., Remdesivir, did not affect COVID-19 patients’ length of hospital stay or chances of survival. These negative headlines exerted some additional pressure on the market sentiment. The S&P 500 Futures dropped as it currently marks 0.15% intraday losses to 3,472.

The reason for the crude oil losses could also be associated with the latest reports suggesting that the Organization of the Petroleum Exporting Countries (OPEC) decided to ease supply cuts despite rapidly falling fuel demand in Europe and the U.S. amid rising numbers of COVID-19 cases in both regions. Thus, the decline in oil prices undermined the demand for the commodity-linked currency the loonie and became the key factor that helps the currency pair limit its deeper losses.

In the absence of the major data/events on the day, the market traders will keep their eyes on September month’s Retail Sales and Michigan Consumer Confidence for October. Meanwhile, the USD moves and coronavirus headlines will also closely followed as they could play a key role in the crude oil.