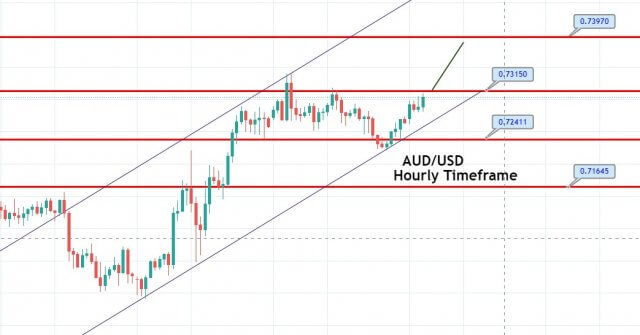 During Monday’s early European Asian trading session, the AUD/USD currency pair succeeded to extend its previous session gains and caught some sharp bids around above 0.7300 level mainly due to the risk-on market sentiment, which tend to underpin the perceived risk currency Australian dollar and contributes to the currency pair gains. Hence, the market trading sentiment was being supported by optimism over a potential vaccine for the highly infectious coronavirus disease. Apart from this, the market trading sentiment was further bolstered by China and Japan’s positive data, which suggests gradual recoveries in global economics. This, in turn, provided an additional boost to the currency pair.

Across the pond, the bullish sentiment around the currency pair was further improved after Governor Lowe dimmed negative rates expectations. In addition to this, the broad-based U.S. dollar bearish bias, triggered by the upbeat market sentiment, has also played its major role in supporting the currency pair. Moreover, the losses in the U.S. dollar were further bolstered by the intensifying doubts over the U.S. economic recovery amid rising coronavirus cases in the U.S. Conversely, the long-lasting coronavirus woes in the U.S. and Europe keep challenging the market risk-on sentiment, which becomes the key factor that kept the lid on any additional gains in the currency pair. The AUD/USD currency pair is currently trading at 0.7293 and consolidating in the range between 0.7265 – 0.7310.

Despite the lingering doubts over the global economic recovery from intensifying coronavirus (COVID-19) woes in the U.S. and Europe, the market trading sentiment has remained supportive by the optimism over a potential vaccine for the highly contagious coronavirus disease. Although, the hopes of potential vaccine were further boosted after the vaccine producers showed readiness to release data on their vaccine candidates shortly. Meanwhile, China and Japan’s positive data, which suggests gradual recoveries in global economics, also boosted the market trading tone. On the data front, the Industrial production in China’s economy surged 6.9% year-on-year for the 2nd-straight month in October, surpassing the expected gain of 6.5%. Moreover, the Fixed Asset Investment grew 1.8% year-on-year in October against 1.6% expected and 0.8% previous. At home, Japan’s Q3 Gross Domestic Product preliminary result came in at 5.0% QoQ vs. against 4.4%.

As in result, the S&P 500 futures managed to extend its previous session positive momentum and remained bullish throughout the European session, which tends to undermine the demand for the safe-haven U.S. dollar and extended support to the currency pair. At the USD front, the broad-based U.S. dollar failed to erase its previous session losses and remained under pressure on the day, mainly due to the marker risk-on tone. Apart from this, coronavirus’s resurgence keeps fueling the fears that the U.S. economic recovery could be halt, which also keeps the greenback under pressure. However, the U.S. dollar losses could be considered the major factor that kept the currency pair higher. Meantime, the U.S. Dollar Index that tracks the greenback against a bucket of other currencies dropped by 0.14% to 92.588 by 10:05 PM ET (2:05 AM GMT).

On the contrary, the intensifying coronavirus woes in the U.S. and Europe and intensifying lockdowns restrictions in Europe keep challenging the upbeat market sentiment, which becomes the key factor that kept the lid on any additional gains in the currency pair. As per the latest report, there were over 54 million cases across the globe and over 1.3 million deaths as of Nov. 16. At the same time, there are approximately 11 million cases in the U.S. separately.

Moving ahead, the market traders will keep their eyes on the economic calendar, which highlights the RBA Gov Lowe Speaks and Monetary Policy Meeting Minutes. In the meantime, the updates surrounding the Brexit trade talks and the U.S. stimulus package could not lose their importance on the day.