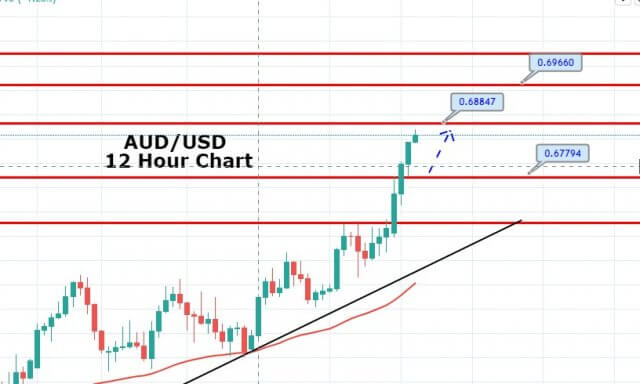 The AUD/USD currency pair flashed green and drew bids around above 0.6840 marks after the Reserve Bank of Australia (RBA) left monetary policy unchanged, which boosted the Aussie dollar and contributed to the currency pair’s gains. The Australian central bank gave optimistic comments about the domestic financial system while saying that the downturn’s intensity will be less than earlier expected, which also exerted some bullish impact on the Aussie.

On the other hand, the fresh declines in the broad-based U.S. dollar in the wake of optimism about the global economic recovery from the COVID-19 virus also kept the currency pair higher. The AUD/USD is trading at 0.6820 and consolidating in the range between 0.6775 and 0.6817. Australia’s first quarter (Q1) Current Account Balance and Company Gross Operating Profits printed positive figures during the early-Asian session.

Despite the U.S.-China tensions and civil unrest in many U.S. cities, the broad-based U.S. dollar erased its some earlier gains as the safe-haven currencies including the U.S. dollar have few friends in the market during this time possibly due to the optimism over the global economic recovery from the COVID-19 virus which eventually provided some support to the currency pair.

On the other hand, the on-going cautious mood surrounding the trading market turned out to be one of the major event that kept a lid on any additional gains in the currency pair, at least for now. However, the cautious sentiment in the market could be attributed to the civil drama in the U.S. over the alleged killing of Minnesota’s George Floyd. As in result, the U.S. President Donald Trump agreed to use all the necessary measures like “military or social” to stop the protests and riots. In the meantime, the Dragon Nation availed these headlines as an opportunity to criticize U.S. President Trump.


The AUD/USD pair is trading distinctly upward near 0.6854 zones, particularly after making a bullish engulfing candle on the 4-hour timeframe. The AUD/USD pair has disrupted an upward channel, which is also supporting bullish bias in the pair over 0.6810 level. Over this level, the AUD/USD has the potential to approach the subsequent resistance level of 0.6910.