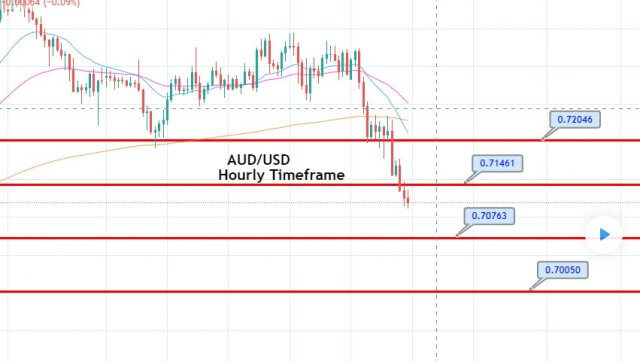 The AUD/USD closed at 0.71693 after placing a high of 0.72349 and a low of 0.71693. The AUD/USD pair declined for a third consecutive day on Tuesday to its lowest level since the 25th of August on the back of broad-based US dollar strength and dovish comments from RBA Deputy Governor Guy Debelle.

On Tuesday, the Deputy Governor of Reserve Bank of Australia, Guy Debelle, said that the bank assessed various monetary policy options, including market intervention and negative interest rates, to reach its inflation and employment goals.

The current rate of interest of RBA is at its record low of 0.25%that was slashed in an emergency meeting in mid-March to secure the Australian economy from falling into recession due to coronavirus pandemic induced lockdowns. RBA also launched an unlimited government bond-buying program and a cheap funding facility for banks. Debelle said that RBA’s board assessed other policy options as the outlook for inflation and employment was not consistent with the bank’s goals. Some under observation options were buying government bonds with maturities beyond three years as the RBA is currently targeting a 3-year yield at 0.25%.

The statement that the negative interest rate was also an option that RBA was considering weighed heavily on Aussie and dragged the pair AUD.USD pair on Tuesday. Meanwhile, from the US side, Jerome Powell and Treasury Secretary Steven Mnuchin before the US Congress were held on Tuesday. Powell said that a lot of the economic recovery was still dependent on the coronavirus developments; however, the economic indicators showed improvements.

Whereas, Steven Mnuchin said that another round of stimulus measures was needed for better recovery. Another Fed official Charles Evans said that interest rates could be raised before inflation reached 2%. These comments increased the US dollar strength across the board, lifted the US dollar Index above 94 levels, and added further pressure on AUD/USD pair prices. On the data front, the Richmond Manufacturing Index from the US raised to 21 points from the projected 12 points and supported the US dollar that weighed on already declining AUD/USD prices.