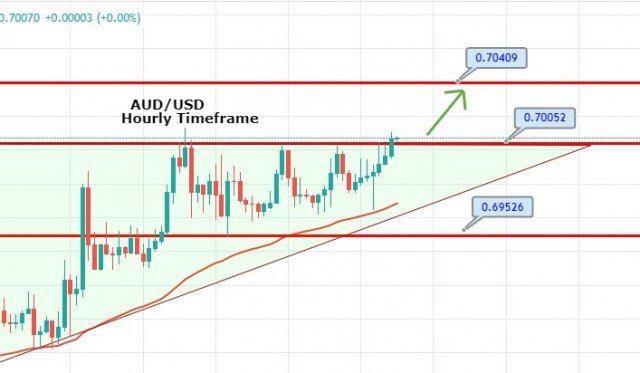 The AUD/USD currency pair flashed green and succeeded to break the hurdle above 0.7000 while taking rounds around the 0.6995 level. However, the uptick upticks in the currency pair could be attributed to the broad-based U.S. dollar selling bias. The upticks in the pair were further bolstered by the risk-on market sentiment backed by the multiple factors, which eventually underpinned the risker assets like the Australian dollar.

The risk-on market sentiment was bolstered by the headline NFP, which showed that the U.S. economy unexpectedly registered 2.509 million jobs in May as compared to the forecasted figure, which pointed a fall of 8 million jobs. The improvement in the jobless rate, which just dropped to 13.3% as against a big jump expected by 19.8% from 14.7% in April, also added in the risk appetite in the market.

Moreover, the upbeat trading sentiment could also be attributed to the hopes for a sharp V-shaped recovery for the global economy, which ultimately underpinned the perceived riskier of Aussie and contributed to the currency pair’s gains. Elsewhere, the risk-on market sentiment was further bolstered by the expectations that the worst part of the coronavirus pandemic was over.

At the USD front, the broad-based U.S. dollar erased its previous session gains and reported losses on the day as investors withdrew their money from the safe-haven assets after the U.S. released a better-than-expected employment report on Friday which eventually contributed to the pair’s gains. Whereas, the U.S. dollar index, which tracks the greenback against a basket of six other currencies, was largely flat at 96.888, having dropped nearly 3% over the last month.


On the negative side, the Australian dollar was recently pressurized by the worsening relationship between close trade partners China and Australia. Although, the Dragon Nation blamed Australia for supporting racial discrimination against Asians, which exerted some downside pressure on the Aussie currency.

Technically, the Aussie has formed an ascending triangle pattern which was supporting the AUD/USD pair around 0.6970 along with resistance at 0.7002. Bullish trend continuation can trigger buying until 0.7040 level today. The RSI and MACD are in support of buying, while the 50 EMA is also suggesting a bullish trend in Aussie.