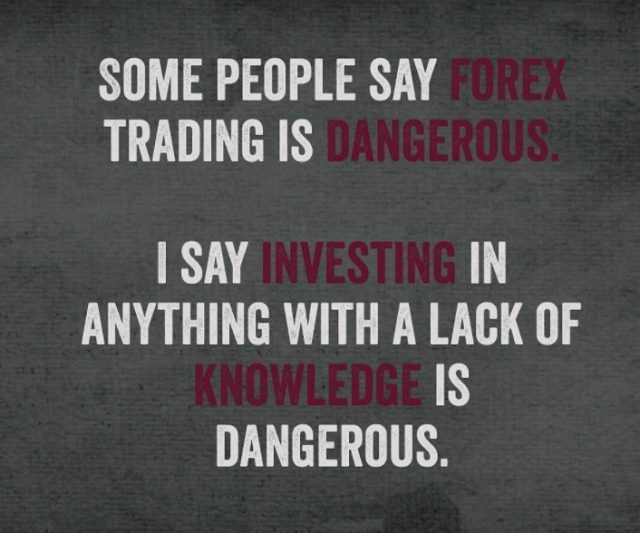 You can find quotes in pretty much anything you do and forex trading is no different, with so many people taking part in the trading world, both successful and unsuccessful people have given their opinions on things that may have affected their trading or that they have learned along the way. We are going to be looking at 20 of the most insightful quotes that we have come across, there will of course be others out there that may influence your trading or your mindset to trading.

“Limit your size in any position so that fear does not become the prevailing instinct guiding your judgment.” – Joe Vidich

Try not to get emotionally involved in your trading, this will lead to losses as you will be focusing on your emotions and what they tell you to trade rather than what your analysis is telling you to trade. This Is made worse when trading larger trade sizes than you should be.

“There is no single market secret to discover, no single correct way to trade the markets. Those seeking the one true answer to the markets haven’t even gotten as far as asking the right question, let alone getting the right answer.”  Jack Schwager

To put it simply there is no one strategy or way of trading that is perfect or that will always work, you will need to adapt if you want to be a successful trader.

“The hard work in trading comes in the preparation. The actual process of trading, however, should be effortless.” Jack Schwager

We should be putting most of our effort into the analysis and working out our trade status. Putting on the trade should be a few clicks, it is the work before that is important.

“There are a million ways to make money in the markets. The irony is that they are all very difficult to find.” – Jack D. Schwager

You can trade as much as you like, it is very easy to put on trades, what is harder is finding the right trades to make, this takes time and effort, and is not as simple as just placing the trades and hoping for profits.

“My attitude is that I always want to be better prepared than someone I’m competing against. The way I prepare myself is by doing my work each night.” – Marty Schwartz

Plan your trades before you are to put them on, being ahead of the competitions and knowing what you want to trade the day before you need to make the process a lot easier when it comes to actually placing the trades.

“I just wait until there is money lying in the corner, and all I have to do is go over there and pick it up. I do nothing in the meantime.” – Jim Rogers

“The market can stay irrational longer than you can stay solvent.” – John Maynard Keynes

If you have a trade going the wrong way, do not try and hold onto it. Instead, you need to cut your losses, the markets can continue to move until your account blows before it turns back

“If most traders would learn to sit on their hands 50 percent of the time, they would make a lot more money.” – Bill Lipschutz

Another one about patience, you do not need to trade all the time, if you do, you will make more losses than you would when waiting for the right trades to trade.

If you are concentrating too much on the markets then you won’t be thinking about your own trades. Look at the markets as they are now and consider your trades, then have backups for what you would do should the market conditions change. Don’t try to predict the change though.

Your risk to reward ratio comes into play here, you need to have this right and you need to stick with it. This way you can control your losses and can predict how much you would win with each trade.

Volatility happens at running pants, meaning when the markets are not moving up or down, the perfect time for scalpers. However, when a trend sts in it generally continues in that direction without much deviation.

“Win or lose, everybody gets what they want from the market. Some people seem to like to lose, so they win by losing money.” – Ed Seykota

You need to plan your trade, each time you place a bad trade you are inviting a loss, some people do not learn and continue to do this, meaning they seem to like the losses.

“Don’t focus on making money, focus on protecting what you have.” – Paul Tudor Jones

If you keep placing losing trades, you will average out as a loser, so plan for good trades, not bad ones.

“When in doubt, get out and get a good night’s sleep. I’ve done that lots of times and the next day everything was clear… While you are in [the position], you can’t think. When you get out, then you can think clearly again.” – Michael Marcus

Your emotions can get the better of you, if you feel that you are trading with emotions, take a break and a night’s sleep, your emotions won’t be as high in the morning and you will be able to better see the markets.

“There is the plain fool, who does the wrong thing at all times everywhere, but there is the Wall Street fool, who thinks he must trade all the time.” – Jesse Livermore

Again, take a break, you do not need to trade every minute of every day.

“Do not anticipate and move without market confirmation—being a little late in your trade is your insurance that you are right or wrong.” – Jesse Livermore

Do not rush your trade, if your analysis takes a few minutes and the conditions change, use that change to work out whether it was a good or bad trade in the first place.

“If you can learn to create a state of mind that is not affected by the market’s behaviour, the struggle will cease to exist.” – Mark Douglas

Take your emotions out of your trading and you will be able to trade with a lot less stress.

“The goal of a successful trader is to make the best trades. Money is secondary.” – Alexander Elder

Concentrate on placing your trades in line with your strategy, then the money will come, focus on the money and you will end up placing bad trades.

“All the math you need in the stock market you get in the fourth grade.” – Peter Lynch

Forex Looks complicated, but it doesn’t use anything you haven’t already learned. Break it down and it is quite simple.

So those are some of the quotes that have inspired us or that give you a good perspective on what experts think about trading and the markets as a whole.