Blockchain has been a breakthrough technology, but would you believe it if I told you a new kind of DLT that promises to render it useless is almost ready for production?

Blockchain has been great thus far. It brought us cryptocurrency and was the technology that set the pace for a myriad of industry-disrupting innovations. If you know what blockchain is, you probably also know that it is a kind of distributed ledger.

And if you heard this for the first time, a  distributed ledger is a database that is shared and synchronized in real-time across many different users, sites, institutions, and physical locations. A distributed ledger is said to be decentralized because it is not ‘owned’ or ‘controlled’ by one entity. Decisions on a decentralized system are essentially made as a contribution by all the members who share it. Because of this, every transaction on the database has public ‘witnesses,’ making the whole system transparent and trustworthy.

Blockchain is not the only technology that makes use of distributed ledgers. Another newer and less recognized technology is Directed Acyclic Graphs or simply DAG. This new kid on the distributed ledger bloc is dubbed the ‘third-generation blockchain’ because it is developed to cover the shortcomings of blockchain, which limits its adaptive scalability.

How do blockchain and DAG relate? Well, if blockchain were a staircase, DAG would be a tree. While the former is a list of blocks, the latter branches out from one transaction to another.

Distributed ledger technology (DLT) does not refer to just blockchain technologies. DAG is another type of DLT that works differently from the blockchain. Most industry experts agree that DAG is a rival technology to the blockchain that offers solutions to some of the major shortcomings of the latter, while others view it as an enabler that only works better in different applications.

While both blockchain and DAG are ledgers that stores records on a distributed ledger, they are very different in structure, and uses contrasting consensus techniques.

A blockchain is an ever-growing chain of blocks of transactions ordered in a linear and chronological manner in such a way that each of them contains a timestamp as well as a link to a previous block. DAG, on the other hand, is a newer kind of distributed ledger that offers all the benefits blockchain offers but with better performance and greater scalability.

In mathematics, DAG refers to a graph that flows in one direction and with no cycles that connect other edges. There is no way to move to every point of the graph, starting from only one end because its edges go only one way. 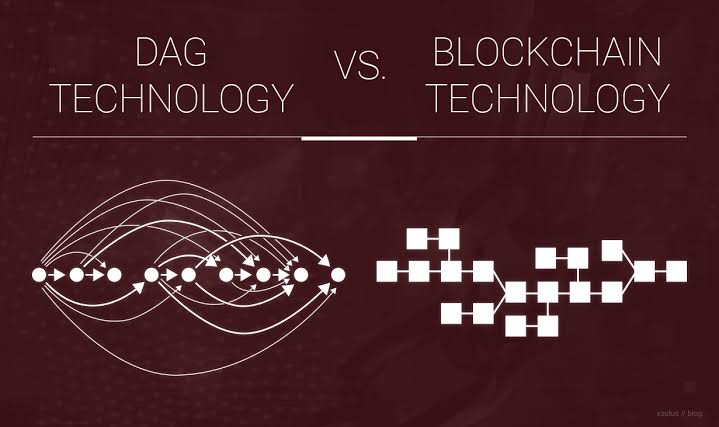 Difference between blockchain and DAG

You should see that in the second formation, transactions are:

In summation, DAG is a ledger of records of individual transactions that link to multiple newer transactions, whereas blockchain is a linear formation of blocks of validated transactions.

Since there are no blocks transactions in a DAG network, it is ideal for use in data processing, scheduling,  data compression, and finding routing navigations.

While this way of enabling and maintaining consensus has been an ingenious innovation, it has its shortcomings.

To guarantee a consistently good quality chain of blocks, to verify them and to add them to the network takes time and effort. There must be quality checks just to be sure that every transaction meets pre-set rules.

Benefits of DAG over blockchain

Blockchain technology was a hit and continues to be the greatest DLT technology because it brings transparency, immutability, and trustworthiness to public transactions. DAG has the same benefits and more. While the storage, network bandwidth, and ‘proof of work’ requirements of blockchain increase with the growth of volumes of transactions, with DAG, scaling is not only efficient in power requirements but also in reducing transaction fees.

DAG, as a decentralized ledger, is not limited by lengthy block verification periods and block sizes. A DAG DLT is much faster than a blockchain one, and while it is still relatively new, it has been tested to provide as many as 300,000 transactions in a second according to figures by  Korean DAG startup Fantom.

By completely doing away with blocks, DAG addresses bitcoin’s major disadvantages: scalability, speed, and efficiency. Being a new technology, this DLT remains untested outside development labs, but most industry experts who have had a say about it laud the innovation for its unprecedented speed potential, scalability, and promise to catch up with established blockchain networks.

At present, there are numerous DAG-based projects in development. One of the most famous is a smart contract platform being developed by Fantom that promises to rival Ethereum in just a few months. Only time will tell whether cryptocurrencies and projects running on the DAG will indeed be the ‘blockchain 3.0’ when it matures.