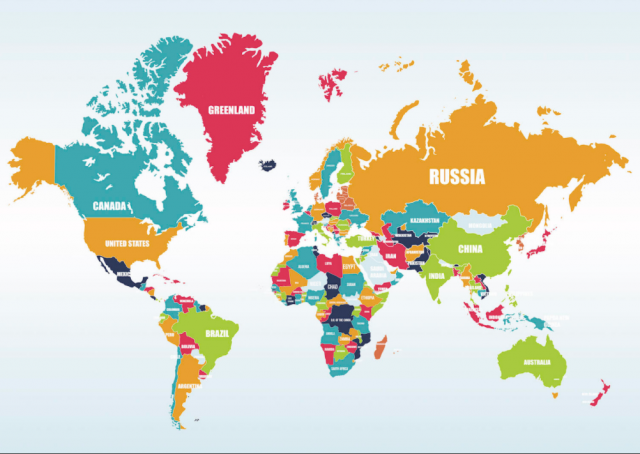 Forex trading is certainly legal in the vast majority of countries around the world, and very few countries prohibit speculative currency trading. At present, Belgium is the most prominent case, with too many warnings to its citizens. Another very different question would be to analyze why in some countries there is more difficult than in others to carry out Forex trading, and then we would have to stop to analyze the particular situation of each one.

Researching in different brokers we have observed that there are restrictions to the opening of accounts to citizens of certain countries. The issue is not that in these countries the practice of Forex is illegal, but that the brokers themselves for different reasons do not want to open accounts with some nationalities.

In summary, the list of countries where it would be more difficult to open an account for Forex trading would be as follows:

Many times, although the governments of these countries do not explicitly prohibit forex trading, it makes it difficult for various reasons, one of them may be the prohibition of bank accounts denominated in currencies other than those of the country itself. That is, as is the case of Venezuela for example, which limited the currency USD for use among its citizens. This circumstance makes complicated the payment in several gateways like Skrill or Neteller and therefore the simple task of opening an account with a few dollars becomes very complicated.

In other cases like Cuba, the limitations that the population has for good access to the Internet also make it very difficult for its citizens to practice Forex trading. Let us not forget that in Cuba and in some other countries the US economic and financial blockade still exists.

Another case apart is the countries in war, in these countries, some of them in the Middle East, it becomes practically impossible to have an account to practice Forex, as the difficulties in general multiply.

“Since tradING is extremely risky, many countries have imposed strict regulations on Forex trade to prevent financial losses for their citizens.”

Brokers are well aware of all these circumstances, and that is why many of them do not want to have relations with citizens of countries they consider “conflicting”. But as the circumstances of each country change from day to day, this list of “banned” countries is constantly being updated.

China. China and India deserve special mention, in these countries Forex trading is restricted by their respective governments, which does not mean that it is prohibited. Yes, it is legal and although China allows currency trading, Chinese traders cannot open their accounts with foreign brokers due to strict capital controls. China-based traders can only open their accounts with Chinese brokers. To attract Chinese traders, international currency brokers can open a local branch in China.

India. Forex retail is permitted in India, although it should be routed only through registered exchanges. Indian traders are not legally allowed to finalise cash transactions for foreign exchange trading. Another restriction of Indian traders is that they can only trade in currency pairs with the Indian rupee (INR), for example, EUR-INR, GBP-INR, JPY-INR, and USD-INR. This implies that Indian traders cannot trade in currency pairs without the INR. This is a big disadvantage for Indian Forex traders.

Japan. There is a lot of competition for Forex trading in Japan for smaller traders, and the market is growing rapidly. The financial services agency allows retail Forex traders in Japan to trade only through licensed brokers in Japan, they cannot register with other foreign brokers. There are also restrictions imposed on margin trading, typically 1:25 for major currency pairs.

Turkey. The law has recently changed (relatively new regulations have only been introduced in 2017) for Forex trading and traders cannot use the services of unregulated foreign brokers. The local broker must also obtain a license to trade on Forex from the Turkish board for capital markets. The trader is required to make a minimum deposit of at least 50,000 Turkish lira.

On the contrary side to what we have been dealing with, are the countries where everything is easy for the practice of forex, and we have thought it convenient to name them also in this article because not everything will be prohibitions and difficulties!!

One of the particular advantages of becoming successful enough on Forex to do full-time trading is that it is possible to do it from any place where there is good access to the internet. There are no bosses, you don’t have to leave the house to go to work, and you don’t need to be in a specific place. You can go anywhere, so why not choose the best place? Naturally what is best depends on each person, but there are some general considerations we can use to make some recommendations.

Many dream of becoming rich with trading, and living in luxury in a city like New York. But the most realistic probability is to have a modest and consistent income. Earning a couple of thousand dollars isn’t exactly a bad income, but there are places where that can be a very good income.

Forex traders know that currencies vary in their purchasing power, and you have to take advantage of that knowledge. In fact, switching to another country could improve the situation of a forex trader significantly.

Trading on forex requires a good internet connection, banking infrastructure, and a friendly tax environment. It is for the latter that many immediately think of countries that do not tax capital gains. But several of those countries, like Hong Kong, Singapore, or Switzerland, have a high cost of living.

On the other hand, some of the so-called low-cost countries w-cost countries have other problems, such as lack of infrastructure and security. The ideal is to find a balance. But you also have to consider trading hours; it is not very pleasant to get up at a foul hour to trade at the best times in the market.

If measured by popularity, Thailand would be at the top of the list. Not only for Forex traders, but many of those who work online will live or spend a good time there. They have no tax on capital gains, life is cheap, friendly people, there is good internet, and many foreigners. Another close candidate would be neighboring Malaysia, for the same reasons. Other countries that are not so well known, but still would be interesting to consider.

Panama: For those looking for a business-friendly and safe environment, in addition to being relatively close to the US. It is also an advantage that they speak Spanish and English.

Malta: It has the same status as the countries of the European Union. The weather is mild and meditative, and it does not tax most of the gains from forex trading.