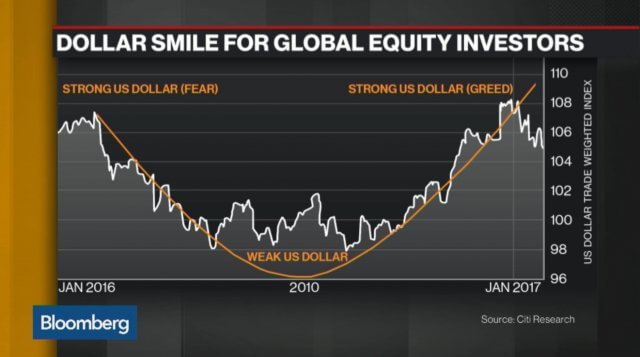 In times of recession, the US currency acts in the same way. The global economy is cyclical. And whether in periods of GDP expansion or recovery, the US dollar allows other competing currencies to take the lead, but in times of recessions, the dollar grabs the blanket.

The main reason is that the US economy is too important and the dollar plays a major role in international payments, gold and foreign exchange reserves, Forex trading volumes, and cross-border loans. A global recession makes investors forget the influence of European macro statistics on the euro rate or the influence of the Bank of Japan’s monetary policy on the yen rate, the pressure of political risks on the exchange rate of the pound sterling. All eyes are on a single coin. The US dollar.

Interestingly, the dollar behaves very similarly in the course of recessions, and this may have become the beginning of the dollar smile theory, which was developed by Stephen Jen, a famous currency strategist for Morgan Stanley. There are three obvious steps in the dynamics of the USD index:

– The Dollar Is Actively Bought Since the US Economy Is Very Stable.

– USD is sold in the midst of the Fed’s aggressive monetary expansion.

– The dollar is bought back amid expectations that the US GDP will recover faster than other countries’ GDP.

As a result, a smile-like image appears.

Let’s look at the dynamics of the USD index in more detail. In the first stage, the dollar is in high demand as the United States economy is strong. It looks better than others, increasing demand for US stocks and bonds and leading to increased investment flows. In 2019 and early 2020, the USD index actually grew in the midst of trade wars, which are the reason for an impressive rebound of the S&P 500 and high demand for treasury bonds.

The first stage always ends with a correction of US stock indices that ultimately makes the bearings the dominant force in the stock market. The dollar manages to reach its peak, “the left side of the smile”, as investors prefer “flight to quality”. It acts as the main safe-haven currency. At the end of February, due to the coronavirus, the S&P 500 moves to bear territory in the shortest possible time, 16 days. The correlation between the stock index and the USD index becomes an inverse relationship. In the first phase of the previous global economic crisis, the dollar consolidated at 24 percent from March to November 2008.

In the second stage, which Stephen Jen decided to call the “smile fund,” there is a sale of the dollar due to the Fed’s aggressive monetary expansion. Cutting the federal funding rate to near zero, unlimited asset purchases, and the White House’s large-scale fiscal stimulus reverse the bearish trend of the S&P 500 at the end of March. Increased demand for risky assets contributes to the closure of long positions on the green note. A similar situation occurred in the last months of 2008, when the Fed through aggressive monetary expansion, including the launch of QE of $700 billion, tried to reverse the bearish trend in the US stock market and bring USD fans to a fixed point. For a while, there was even a sense that it did: the USD index fell in December.

In the third stage, the dollar rises again, as investors begin to believe that the US economy will recover faster than its foreign counterparts. US stocks seem cheap, while low borrowing costs, the Fed’s ultra-soft monetary policy, that gradually recovers GDP and hopes that corporate earnings growth will rekindle the interest of non-residents in US assets.

So, if we follow the dollar smile theory, it’s time to buy the dollar. At the same time, it is not the fact that the US economy can recover faster than China’s global GDP, and the Fed’s strong desire to prevent the strengthening of the dollar from seriously changing the rules of the game.