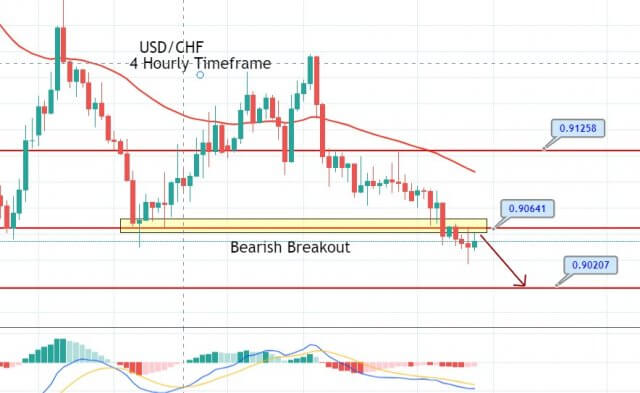 During Tuesday’s European trading session, the USD/CHF currency pair failed to stop its previous session bearish moves and dropped to fresh multi-years low just around the 0.9035, mainly due to the broad-based U.S. dollar weakness. That was triggered by the disappointing U.S. economic data and worries that the second wave of COVID-19 cases in the United States could ruin the recovery in the world’s biggest economy.

The on-going doubts over the U.S. Stimulus Package also weighed on the American currency and contributed to the pair losses. On the other hand, the concerns about strengthening the US-China tussle weighed on the market trading sentiment, which supported the safe-haven Swiss francs and contributed to the USD/CHF pair’s declines the lowest level since January 2015. At this particular time, the USD/CHF currency pair is currently trading at 0.9052 and consolidating in the range between 0.9037 – 0.9069.

Due to the pretending reduction in coronavirus cases by decreasing testing, the worries about the U.S. economic recovery still hover all over the market and keep the U.S. dollar bulls defensive. Apart from the U.S., the coronavirus cases in Europe also increasing day by day. As per the latest report, the reported number of coronavirus cases increased to 225,404 with a total of 9,236 deaths so far. Whereas, the cases increased by 1,390 in Germany on the day against the previous day +738. At the same time, the death losses rose by 4, according to the report of German disease and epidemic control center, Robert Koch Institute (RKI). This, in turn, benefitted the Swiss franc’s safe-haven currency and contributed the pair losses.

Elsewhere, the risk-off market sentiment was further bolstered by the long-lasting disappointment over the lack of progress in the much-awaited fiscal package. As well as, the on-going tussle between the United States and China became sourer after the suspension in the bi-deal annual trade review with China. It is worth reporting that the Trump administration keeps increasing the hardships for China’s companies by imposing punitive measures on Chinese 38 facilities from Huawei, which exerted a very downside impact on the market and overshadowed optimism over a potential vaccine for the highly infectious coronavirus infections.

As a result, the broad-based U.S. dollar failed to gain any positive traction on the day and reported losses as the U.S. Congress’s inability to reach an agreement for the U.S. latest COVID-19 stimulus package kept the investors defensive. However, the losses in the U.S. dollar kept the USD/CHF currency pair bearish. Whereas, the U.S. Dollar Index that tracks the greenback against a basket of other currencies was down 0.22% to 92.642 by 12:21 AM ET (5:21 AM GMT).

The market players will closely follow the release of the Building Permits and Housing Starts. However, this data usually does not leave any major impact on the currency pair. At the important front, the release of the latest FOMC meeting minutes will be key to watch.


The USD/CHF has violated the triple bottom support level of 0.9064 and the closing of candles below this is supporting the solid potential for further bearish bias. Therefore, we are looking to target 40 pips until 0.8990 to take a profit level.