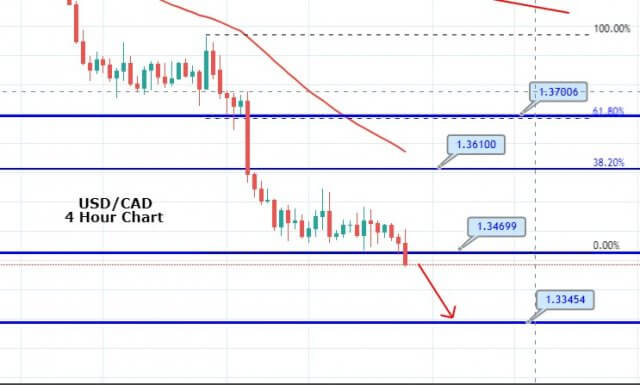 During Friday’s European trading session, the USD/CAD currency pair flashing red and dropped below the key 1.3500 psychological marks due to the selling bias in the broad-based US dollar triggered by the optimism about a sharp V-shaped recovery for the global economy. The modest upticks in the crude oil prices underpinned the demand for the commodity-linked currency the loonie and exerted some downside pressure on the currency pair. At this particular moment, the USD/CAD currency pair is currently trading at 1.3485 and consolidates in the range between the 1.3459 – 1.3513.

The reason for the risk-on market sentiment could be attributed to the growing optimism over a sharp V-shaped economic recovery from the coronavirus pandemic, which recently dominated the US-China ongoing tensions and made the broad-based US dollar weaker. US President Donald Trump’s comments further bolstered relationships between the world’s two largest economies that the Chinese government has continually violated its promises to the US and many other countries.

At the USD front, the broad-based US dollar erased its early-day modest gains and dropped to 96.600, mainly due to the risk-on market sentiment which ultimately exerted some downside pressure on the currency pair. Whereas, the US dollar index drops 0.22% to a new three-day low of 96.46, having stopped the overnight bounce near 96.80.

At the crude oil front, the modest upticks in crude oil prices strengthened demand for the commodity-linked currency the Candian dollar and further contributed to the weaker tone in the USD/CAD currency pair. However, the Oil prices regained some traction due to the hopes that major oil producers (OPEC+) will extend the production cuts when they meet on Saturday. It remains to see if the USD/CAD pair continues to attract some buying near a technically significant moving average or ace further seeling bias to confirm a fresh near-term bearish breakdown. Looking forward, Friday’s monthly jobs report from the US (NFP) and Canada will be a key watch. We have entered a sell trade below 1.3469 level, and now it’s expected to lead the pair further lower towards the area of 1.3345.