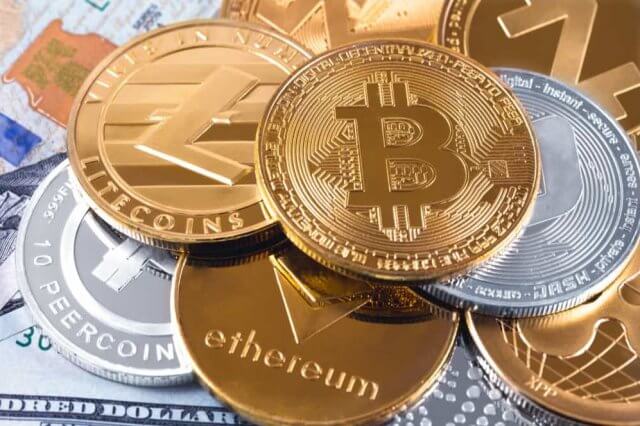 Cryptocurrencies present limitless opportunities for Forex traders. However, the prospect of trading with these non-traditional currencies can seem daunting, especially now that there are so many available. Here, we’ve outlined the top five cryptos for trading with this year and into the foreseeable future.

Bitcoin is still the most famous cryptocurrency, largest,  and most valuable. It was also the first to be launched by the still anonymous “Satoshi Nakamoto” in 2009. It is accepted at more points of sale than any other cryptocurrency. Bitcoin is the first choice for most investors, traders, and speculators, as it is the most liquid cryptocurrency and can be sold, bought, or traded on all platforms, more than any alternative. Bitcoins are created in mining, which used to be inside the capacity of laptops and desktops but is no longer so easy to do. At current mining rates, 18 Bitcoins are manufactured approximately every 15 minutes.

This rate of creation will be gradually reduced until the total number of bitcoins in existence reaches a maximum of 21 million, which at this rate will occur approximately in the year 2140. All transactions, including the manufacture, by mining, of new bitcoins, the price of bitcoin, and all sales and transfers with bitcoins, are recorded in a ledger.

Transactions have to be accepted by most nodes in Bitcoin’s blockchain technology and, since Bitcoin is relatively widely owned, transactions take less than 1 minute to be fully verified. The bitcoin miners act as nodes within the blockchain, effectively managing the system and processing all transactions. Once the 21 million bitcoins have been extracted, miners will have a greater need to collect transaction fees to maintain profitability. For this reason, traders are concerned that cryptocurrency may face a major problem in the future.

It is worth noting, however, that the purchase of assets or even a currency exchange a transaction fee also takes place, for this reason, Bitcoin is not necessarily at a disadvantage compared to other marketable assets. Miners can now charge transaction fees if they wish and choose which outstanding transactions to prioritize if they generate a commission. This means that, if you are in trouble, you can pay a little more for your transaction to be processed faster.

The transactions and ownership of Bitcoins are effectively private, since, although the block chain’s general ledger is publicly accessible and has a record of every transaction that has been made, owners are registered by digital credentials (“keys”) and not by their name or other tax identifiers. Holders can store and protect their keys using a variety of methods, all of which will be treated in more detail later.

In addition to being the greatest and famous cryptocurrency, Bitcoin has a pioneering and rebellious image, not being backed by large corporations, and is seen as a bold intrusion. In other words, Bitcoin can be the Wikileaks of cryptocurrencies!

Ethereum is second by size compared to Bitcoin. It was released in 2015 and was developed by a Bitcoin programmer who was disenchanted with the functionality of Bitcoin. Stock market capitalization is slightly less than half that of Bitcoin and there are approximately 750,000 individual Ether owners (as the currency is technically known). As a means of payment, it is accepted by very few points of sale or any commercial organization.

The characteristic of the Ether is that it is a blockchain technology designed to perform “intelligent contracts”, which are computer protocols designed to facilitate, verify, or enforce the negotiation or performance of a contract. The way of thinking about Ethereum is like a currency for commercial contracts over the Internet, unlike Bitcoin, which pretends to be more a reserve of value and means of generalized exchange. The surprising thing about “smart contracts” is that they control themselves: contracts are automatically canceled when a party fails to fulfill its obligation.

In other respects, Ethereum is actually very similar to Bitcoin. It is also extracted, but the characteristics that govern its extraction in the future are less clear than the Bitcoin rules. Ethereum has a more corporate identity and was launched into the market by a Swiss company. Ethereum has suffered from some negative publicity such as its general ledger has been successfully hacked and has suffered several hard forks (Hard Forks), being the first destined to recover the stolen assets after the attack of the hackers. However, some cryptocurrency analysts see in Ethereum the potential to surpass Bitcoin in market capitalization at some point in the future. Even so, in recent months the capitalization of Bitcoin has grown proportionately faster than that of Ethereum.

Bitcoin Cash or Bitcoin Cash is a branch of Bitcoin, created on August 1, 2017, following a hard fork in the Bitcoin blockchain. This hard bifurcation was the result of differences between those who prioritized Bitcoin as a value reserve (i.e., an investment) over a medium of exchange (i.e., cash to make transactions). Some Bitcoin miners wanted the boundaries to be removed, which would speed up transaction times. The result was that Bitcoin split up to form a new cryptocurrency with a faster transaction time, called Bitcoin Cash. It is extracted and operated in the same way as Bitcoin. Bitcoin Cash is generally more useful for people who need to derive their income streams from cryptocurrency or make many quick business transactions. It can be taken into account as an investment vehicle as it has a niche market and, since the fork, there is no doubt that its price has risen faster than that of Bitcoin.

Ripple is the third-largest cryptocurrency in the world. It was created in 2012 but had been in development for approximately 8 years. Ripple is quite different from Bitcoin and Ethereum, as it has a more corporate image and backing, and is actually a decentralized, consensus-verified transaction network rather than a cryptocurrency. It was developed as a real-time gross settlement system, fast and inexpensive and can confirm transactions in a few seconds, faster than any other cryptocurrency. Already being used by several major banks for years, which consider it a safer system than Bitcoin and other cryptocurrencies.

Its native currency is Ripple, but it can support any unit of value, be it fiduciary currency like the US dollar or even flight miles and the like. This adaptability, as well as its use by banks, attracts some investors who are confident that Ripple’s technology will dominate the market and could eventually overtake Ethereum and Bitcoin in market capitalization. But it must be said that its value has increased more slowly in recent years than the value of other important cryptocurrencies.

Litecoin is the fifth-largest cryptocurrency. It was created in 2011 and was a Bitcoin fork, that is, a branch of Bitcoin. Its way of working is almost the same as Bitcoin in every way, except that has always proven to have a faster processing speed and is currently capable of processing transactions approximately four times faster than Bitcoin.

Overview of the 5 Main Cryptodivisas

From an investment or trading perspective, it is important to know the differences and similarities between each of the main cryptocurrencies as a starting point. This way, you can make sure you don’t buy too much of the same type of asset. So, let’s look at the characteristics of each of the cryptocurrency. The main elements that differentiate them and that are likely to influence their future perspectives are your market capitalization, functionality, popularity, image, security, and processing speed.

The notable atypical asset is Ripple: it is very corporate and a network rather than just a currency. In the future, it may become the matrix through which all, or almost all, crypto transactions are executed. In addition to Ripple, the main rivalry is between Bitcoin and Ethereum, and the latter hopes to soon overtake Bitcoin as a market capitalization leader. Bitcoin Cash and Litecoin can be grouped as currencies that are designed to be optimized for exchange rather than savings/investment.

For these fundamental reasons, it may make sense to divide the five crypts into 3 groups:

When we talk about technical analysis of market values, the story is more complicated. The price movements of the last 6 months seem to suggest that there is validity in our categorization by groups. Note also that cryptocurrencies with lower market capitalization appear to show stronger volatility, which is not surprising since illiquid assets are usually more volatile.

If you’re considering becoming a long-term cryptocurrency investor, it’s worth thinking about buying a number of lesser-known currencies that may become larger. By investing in very risky assets, the best returns are often made from spectacular gains on just one or two instruments. Therefore, a portfolio of small investments in smaller cryptocurrencies could have a high potential return.

If you decide to invest in lesser-known cryptocurrencies, it is very important that you do your own research. You can see a list of the top 100 cryptocurrencies by capitalization here. In the meantime, we’d like to list some of these smaller alternatives that we think might end up standing out in the crowd.

Golem, based on a network where anyone can earn money by renting their unused computing capacity in the cloud. It is now the twenty-seventh largest cryptocurrency by stock market capitalization.

Monero: announced as virtually nonpirateable and with an unprecedented level of security. It is now the fourteenth largest cryptocurrency by stock market capitalization.

Storj: the currency of a cloud storage system based on the blockchain system, where the currency is issued in exchange for a provision of storage space.