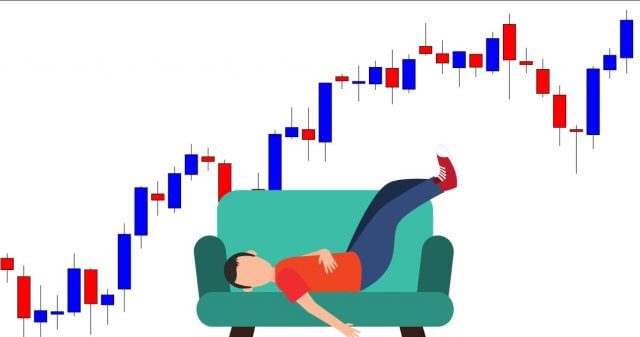 Is there such a thing as set and forget strategies? We would like to think that there should be some trading strategies that can work this way, but these should be used with caution and minimal understanding of the market, at least. When we talk about such strategies, the first thing you should know immediately is that they are made to be used with small leverage. After all, the last thing you would want is to be leveraged up to 200 times, perform an operation and then withdraw hoping that there will be some sort of backlash against you, as it could be too costly.

In the investment world, a set and forget strategy is the idea that you can buy or sell something and just retire. This is similar to what a trader shareholder does, buying a share in a company like Walmart while assuming that there will be dividends and that the company will continue to exist. There are no worries about a margin call. They simply buy shares and keep them. This is not the same as in the Forex market, as leverage and volatility make long-term retention a much more dangerous idea. Most retail brokers are speculators, so they tend to focus on short-term strategies.

One of the exceptions was the old carry trade, but that strategy no longer exists for the most part because retail brokers have broken the differentials between paired interest rates. Not so long ago people would just buy something like AUD/JPY at the end of the day interest rate, implying that at the end of the day they received very little payment, but much larger funds were getting advantage of this at the same time, raising those pairs. The financial crisis eliminated many accounts while that kind of trade was dismantled. Unfortunately, many retail brokers face margin calls after months and years of reliability.

Investment and Lack of Leverage

One of the questions you should know about setting up and forgetting strategies is that they are more suitable for investors and less suitable for speculators. This doesn’t mean you can’t use it to speculate, it’s just that you need an appropriate amount of capital.

When you make the decision to invest you assume that the price of a financial asset will be valued over the long term. The average investor is not worried about a 1% decrease in the value of an asset he owns. For example, if you bought a share of Microsoft and it lost 1% today you wouldn’t be surprised or worried. You are probably expecting to own such stock for several weeks, perhaps months or years. You know that in the long run, Microsoft will probably appreciate, or at least pay dividends. Maybe I’d have an emergency stop on the market, but that could be 10 or 15% below the current price. This is because you’re only risking 10 or 15% because there’s no leverage.

Reduce Leverage for these Strategies

Just as you wouldn’t use leverage for long-term trading of financial assets, you don’t need to use it in other long-term trading strategies. It’s true that leverage can make you extremely rich, but the most likely thing that could happen is that you would have a pullback that would cause a margin call, or a pullback later that would make you nervous enough to leave the trade, making it impossible to retain in the long run.

A perfect example would be to use the moving stocking crossing system. Although there are shorter-term versions of this, one of the most common ways to trade with this system is to use an exponential moving average of 50 days and one of 200 days. If the 50-day pass above the 200 day pass you must keep the asset in your possession. In the same way, if the 50-day pass below the 200-day, you should sell it. There will be traders in the market any minute, coming and going as moving socks cross each other. We need not say that it needs a trend to make this happen effectively. The side markets are very difficult when it comes to moving average crossing systems.

In the world of Rex, the way to avoid this potential danger is to take a position with little leverage. For example, if you have 1000 dollars in margin, the size of your position could be something like 5000 units. That’s 5-to-1 leverage. We understand that doesn’t sound like much, but it also gives you the ability to stay in that trade for weeks, months, and even years if the system allows it. Beyond that, if you have losses, and you will eventually have them, these will be small.

Another example of a “set and forget strategy” is to use a longer-term Fibonacci backlash based system. In the example below, you can see that we have the same graph that I used for a moving stocking crossing system. This time, you can see there’s a blue arrow in 50% of Fibonacci’s recoil. Most of the time, the longer-term traders will take 50% back from Fibonacci from a high swing as a sign that they must buy, and use the next Fibonacci recoil level, less than 61.8% in this case, as their stop loss. This case ended in a 230 pips stop loss, but you expect the market to return to its higher values at least. That would be a goal of 700 pips. Obviously, this works in the end.

A stop loss of 230 pips frightens many traders but in the end that depends on the size of the position. I guess the biggest lesson of all is that your position really matters. You will not get rich this way, however, you can create your account without stress. With such strategies, it is necessary to review the charts only once a day. Obviously, there are many other strategies but these are two of the most basic and popular.

There are a couple of alternatives if you need to use leverage. One, of course, is to resort to the options market. You can go to the options market and sell against the SPY, for example. This shows that you believe the market goes up and automatically creates leverage. In fact, you can buy calls, there are millions of ways to go for options through your broker or your futures platform.

However, if you are selling and buying FX spot, the only way we know how to use leverage and a set and forget strategy, in this case, is to simply put your stop loss and profit target in order and shut down the computer. It’s possible, even if it’s hard. One of my favorite trades was the short sales of the USD/SGD pair. I went on holiday forgetting that I shortened the market, but I had a stop loss put there. When I came back, I had grown 800 pips.

In a way, all trading strategies must be set and forget, for this is stop loss. If you’re very nervous about a position, chances are you have too much leverage. Think of it this way, you’re gonna be a lot more afraid of losing 1000 USD than you are of losing 10 USD.