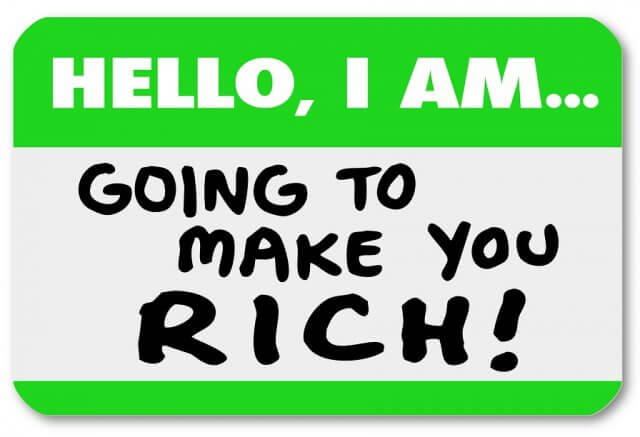 A lot of the adverts that you see around the internet all seem to be based around the fact that you are able to get rich pretty quick, even overnight when trading, but is this actually the case? Can you actually get rich overnight, or is that just a fantasy?

The truth of the matter is that you can in fact get rich quick overnight, it certainly is possible, is it likely? That is another question and one that is a resounding no, so you can get rich, but you are far more likely to lose any money that you put in rather than making more. We will point out straight away, that while he adverts may say that you can get rich quick, you certainly won’t with them, those sorts of adverts are complete scams and should be avoided at all costs.

There are a few different strategies that you could use to get rich pretty quick, again we must point out that we are not recommending that you try these strategies, there is probably a 0.01% chance that you can sustain them for more than a day or two and so they are ultimately a sure-fire way to lose your money and to blow your account. So let’s take a little look at what these strategies are.

The name pretty much suggests what this one is, it is pretty much like flipping a coin, you will either double your money or you will blow your account. It is certainly not something that you should be doing unless you are pretty heavily drunk and are happy to throw away whatever money you have lying about. You will simply put on a trade with a much higher trade size than you should, place a take profit at the point where the balance would double, place, and sit back and see what happens. Some people put it to a 10 pip movement to blow, others a bit more, but people who do this are often looking for a quick turnaround, so it will normally only take a few pips up or down to either double or blow the account. I am sure that you can see why this is not a sustainable method, simply because at some point you will be wrong and that will be everything gone.

For those that wish to try this rather risky strategy, we would highly recommend that if you win the first trade, take out the initial money, at least this will protect the moment that you put in. We have actually seen people win  3 or 4 of these trades in a row, going from $10 to $160 in next to no time, of course, the next trade lost and so they lost it all. If you remove that initial deposit, at least you won’t have lost anything. We have also seen people lose the first trade 5 or 6 times in a row, will take a lot of luck to make that money back and if you get into that situation, it is probably better to just quit and walk away.

If you have been in the casino game or done any sort of gambling in the past then you would have probably heard of the Martingale strategy. The strategy was eaten and was popular in 18th century France. The strategy is based around doubling your bet or in this case trade size each time that you lose. So if you had a trade of 0.01 lots which lost, you would then do a trade of 0.02 lots, if those lose then you would do a trade of 0.04 lots, you would continue to do this until you had a trad that won, the winning trade would then win back all the original losses plus the profits that the original trade would have won. Seems like a good strategy, and in theory, it is. In theory, it could give you a 100% profit rate as you will eventually have a winning trade, won’t you? Yes, but how long will it take?

The problem with this strategy is that it could take an unlimited amount of money in order to make that trade. If you have a balance of $100 you will only have a certain number of trades available for you before you lose all your money, if you have a $1000 account, you only have two extra trades than you would have and $100. The more times you need to trade, the amount required will grow exponentially, so unless you have an unlimited amount of money, at one point or another, you will blow the account.

Another form of trading that looks to try and double your money, or at least trade it up as quickly as possible is something called rapid trading, this basically involves you making a lot of trades, and we mean a lot of trades in order to take lots of little profits. The problem with this trading strategy is that it is very easy to overwhelm yourself with the number of trades that you have. In a normal scenario, you may have one, two, or maybe three trades active at any one time, but with the rapid trading strategy you can quickly grow up to 100 open trades, on various pairs, or even on the same pair. The issue really becomes apparent when you do not have stop losses set properly on these trades, so you could ultimately have 100 small trades going against you at the same time, giving the same results as placing one very large trade, well above the size that you should be trading.

There are a number of different expert advisors that have been set up to work this way, they are often the ones claiming that they are able to double your money in a day, and they actually can, the problem is that they may double it one day, the next day they will completely lose everything. This is an extremely reckless strategy to be using and one that we would certainly not recommend. Having said that, it does look pretty incredible seeing 100 different grades all changing prices at the same time, it looks good but doesn’t work well.

This is probably the worst idea that you could probably have, yet it is something that a lot of people still do. One of the major sayings and pieces of advice that people are given is not to trade anything that you cannot afford to lose, this ensures that you are still able to pay your rent and buy some food, so what would make you think that it is a good idea to borrow some money in order to trade? We understand that having more money means that you can make more money, but what if you lose? There is a  good chance that you will lose, if you do, then how are you going to be able to pay that money back.

Trading or gambling with borrowed money is a disaster waiting to happen, if the thought of doing this ever crosses your mind, try to think about what would happen if you lose, you will be paying that money back for years to come, a lot of years depending on the amount that you borrow. Don’t do it, just don’t. Only trade what you can afford to even if the prospect of making a lot more money is a good one.

So those are a few different strategies that really can live up to the promise of making you rich pretty quick, the problem is that the chance of them actually making you rich is very low due to the massive amounts of risk involved in them, in fact, we would just as likely suggest that you put all of your money on the lottery, you probably have just as much chance of winning that than you do for these strategies to succeed over any long period of time.

We would advise that you stick to tried and true strategies that have been tested and proven to work, trading is not a quick money-making scheme, it is a long term project that can really change your future if used properly.