In the S. XV, at the time when the so-called Silk Road had its decline, a network of trade routes that from the 1st century B.C. crossed all of Asia to trade goods through territories such as present-day China, Mongolia, Turkey, even Europe, and Africa. At the end of the intermediate period, destination prices were much more inflated than at the beginning, so cheaper maritime alternatives began to emerge. This weekend gave me a chance to reflect a little more on this great country, which also has a great cultural interest.

Is it a good decision for us to invest in China?

We continually hear that China is a superpower and that its growth rates are incredible so that it can overcome the global hegemony that hosts America today. It also has a barbaric population, of which historically the majority has belonged to the lower class but there are more and more middle class with greater capacity for consumption. All this is true but… Is all that shines gold? We know that in the Republic of China the Communist Party rules and the Communist Party controls the big banks of the country. These big banks do what the party dictates, so in the end, they are obliged to offer loans to companies and sectors that the party wants to benefit from, and the same but on the contrary, they are forbidden to finance other companies or sectors.

In this context, there are companies that need financing and cannot resort to traditional Chinese banking, so their alternative is to resort to so-called “shadow banking”. Shadow banking (which we will refer to as non-banks) are banks that do not comply with banking regulations. In other words, the requirements are lower than the traditional banking system.

In general, non-banks lack access to central bank funds and other features such as deposit insurance and debt guarantees. These non-banks have fewer leverage constraints so in times of bonanza like these last few years they make more money but are more fragile when problems such as defaults appear.

The current situation in China 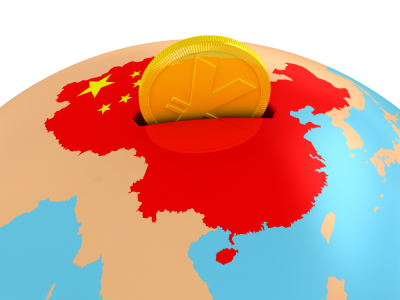 China has aggressively stimulated its economy in 2019 Q1 and Q3. Again, it is something that has been repeated in the Q1 of 2020 as a result of the Coronavirus (injecting money and lowering interest rates). They indicate that there is a debt saturation that is close to not being assimilated and that while the debt continues to grow, growth has stagnated.

In 2018, the hole in the Chinese deficit stands at 5%, but considering shadow banking it would rise to 11%. In 2014 it was 1% and 5% respectively. In addition, there is most likely a huge amount of loans that are not being repaid, and that will be a problem on the balance sheet of Chinese banks.

China’s GDP is growing less and less, and now along with the impact of the Coronavirus the growth forecasts for 2020, which are forecast to be around 5-6%, are still shrinking further, in any case below the 6.1% that there was in 2019.

The debt of China

Since 2008, China’s GDP debt has doubled, surpassing 300% of GDP in 2019. This trend is not exclusive in China, since high indebtedness is something global, and here in Spain, we are not to shoot rockets either. In addition to this high level of indebtedness and the fact that the granting of financing is not based on criteria of the probability of being able to repay the money but on the interest of the scheme, We still have to add to the equation the probability of distorting the data that comes to us as there is a great deal of mistrust within Chinese audit firms.

All this helps illustrate why there is greater concern about China’s banking system. While it is difficult to have a solid view of China’s true economic strength, there are strong reasons to believe that the country is facing a complicated situation with a highly leveraged banking system full of questionable quality loans and growing defaults. While the media prefer to focus on the figures of Trump and trade, the biggest threat to the Chinese economy may be a massive financial bubble from within.

What if it’s not a big deal and we’re looking at a great investment opportunity?

The truth is that leaving aside Chinese macroeconomic issues, today there are renowned investors who tell us that there are many investment opportunities in Chinese companies and other data that can make us believe that it can be a good investment. For example, last week Charlie Munger commented in his “2020 Daily Journal Annual Meeting” that ” the most reliable and strong companies in the world are based in China and not in America”.

On the other hand, if we look above two large ETFs representing the USA and Chinese market:

And if we make the comparison we see that the average PER of the USA market is at 23.87 and that the average PER of the Chinese market is at 13.14. It is clear that the PER has many limitations and we should not rely too much on this ratio when investing, but it can serve as a little guide to compare markets. Leaving aside all its limitations, this photo comparison of these two ETFs seems to tell us that there is a big valuation difference between China and the USA. Is it possible that the USA is expensive? Or maybe China is cheap?

On the other hand, there are giants like Tencent or Alibaba that seem unstoppable to this day. We will have to continue investigating…