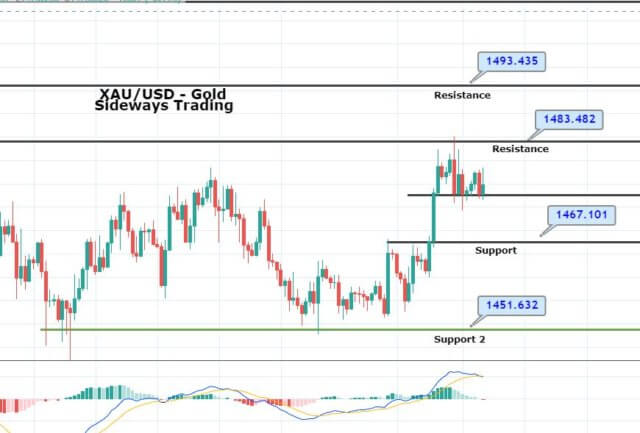 Gold prices mostly traded in sideways trading range of 1,483 – 1,475 due to lack of market moving fundamentals. Recently, the statement by Trump having no-deadline for the US-China agreement drove US Treasury yields lower and helped in tightening the spread between US Govt. Bond yields & Japanese Govt. Bond Yields. This made gold more attractive that day and hence XAU/USD pair suffered.

A report from Bloomberg turned the table by saying that US & China were moving closer to a trade deal. According to the report, the US & China were under talks to agree on the amount of tariffs that would be rolled back in Phase-one trade deal despite the raised tensions over Hong Kong issue.

China has been continuously demanding the roll back of US tariffs as part of phase-one trade deal which Trump has denied earlier. Yesterday, reports came in favor of trade-deal raised the hopes for phase-one deal completion by mid-December. This happened despite the increased tensions between US & China after the US legislation to punish Chinese officials over human rights issues in Hong Kong.

Technically, the precious metal gold is stuck in a narrow trading range of 1,483 – 1,467. On the 4 hour timeframe, gold is forming neutral candles above 1,472 mark which is extending an immediate support to gold today. Bearish breakout of this level can extend sell-off until 1,467 level.

The RSI and MACD are holding around 50 and 0 respectively, suggesting neutral sentiment of traders. Looks like, traders are going to keep trading choppy session until the NFP is released tomorrow.