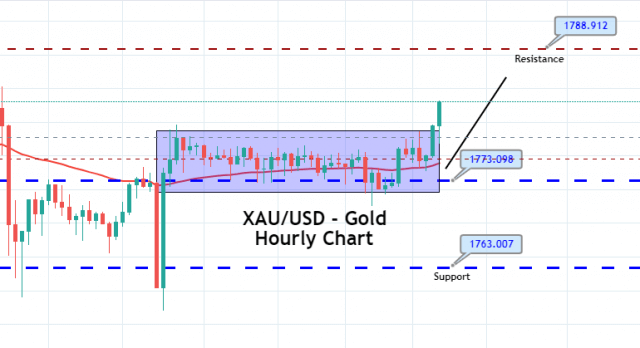 The safe-haven metal prices failed to gain any positive traction and hit the intraday low of $1,770 level while represented 0.20% declines. The downward movement of gold was mainly due to the risk-on market sentiment in the wake of upbeat vital data from the U.S. and China, which undermined the safe-haven demand in the market. On the other hand, the broad-based U.S. dollar weakness helped limit any additional losses for the yellow metal. Whereas, the Pandemic fears and geopolitical tensions exerted some downside pressure on the risk sentiment and capped further losses in gold. At the moment, the yellow metal prices are currently trading at 1,772.67 and consolidating in the range between 1,770.18 and 1,776.91.

At the coronavirus front, almost 15 states of the U.S. have reported a record hike in new cases of COVID-19, which has infected approximately 3 million people in the U.S. and killed about 130,000 so far. It is worth mentioning that Texas registered the record high coronavirus figures for seven consecutive days. Moreover, no progress came out of the virus vaccine.

Despite this, U.S. President Donald Trump did not give any major attention to the latest surge in the coronavirus (COVID-19) numbers, which also contributed to the risk sentiment. On the negative side, the geopolitical tension between the United States and China remained on the card, as well as, China’s tussle with India, and some of the developed economies also weighed on the risk sentiment and gave some support to the yellow-metal traders.

Apart from this, the U.S. President Donald Trump was still considering two or three actions against China, with a high probability, in the wake of passing the Hong Kong security law. As per the White House administration official, “Something could be revealed soon, more likely in days than weeks”. In the meantime, the United States recently sent two aircraft carriers to the South China Sea for exercise as China holds drills, which recently challenged the current risk-on sentiment.

The broad-based U.S. dollar failed to extend its previous gains and edged lower on the day, mainly due to the lack of safe-haven demand in the market backed by the upbeat vital data from the U.S. and China. Whereas, the investors cautiously withdrew their money from the safe-haven asset due to the optimism over U.S. services sector activity data due to be released later in the day. However, the losses in the U.S. dollar became the key factors that kept a barrier on any additional losses in the gold prices as the price of gold is inversely related to the U.S. dollar price.