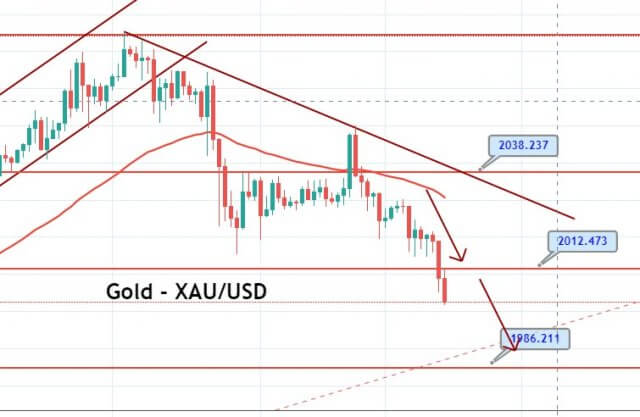 The yellow metal prices extended its previous day losing streak and took offer near $2,014 level due to the risk-on market sentiment, supported by the expectations of a next U.S. stimulus, which boosted the market trading sentiment and undermined the safe-haven demand in the market.

On the other hand, the ongoing struggle between the United States and China continues to simmer, which became the key factor that helped the safe-haven gold limit its deeper losses. The broad-based U.S. dollar weakness, in the wake of upbeat trading sentiment, also capped losses for the yellow metal. While the ever-rising number of COVID-19 cases also urge investors to take shelter into safe-haven assets. The yellow metal prices are currently trading at 2,015.01 and consolidating in the range between 2,013.17 and 2,030.05. Despite many factors portraying the rush to risk-safety, the market players just giving attention to the optimism that the U.S. Congress reached closer to an agreement over the latest COVID-19 stimulus measures that caused a rebound in U.S. bond yields.

Despite the ongoing tussle and tit-for-tat responses between the US-China, the trade deal remains intact, as investors are awaiting a meeting between top U.S. and Chinese trade officials on Saturday to examine the first 6-months of the Phase 1 trade deal. On the contrary, the Dragon Nation imposed sanctions on 11 U.S. policymakers that include two Senators yesterday, in return to the U.S.’ move last week sanctioning 11 Chinese officials and their allies in Hong Kong. However, these gloomy headlines helped safe-haven metal to limit its further downside momentum.

Also challenging the risk-on market sentiment was the COVID-19 crisis. As per the latest report, the COVID-19 crossed over 20 million cases reported as of August 11, as per the Johns Hopkins University data. But Texas, New York, and California reported declining numbers of hospitalizations.

Elsewhere, U.S. President Donald Trump tweeted that top congressional Democrats wanted to meet with him over COVID-19 related economic relief. While the U.S. Congress is set to restart discussions on the COVID-19 deal. This, in turn, boosted the market risk sentiment and kept the yellow-metal under pressure. However, the investors now will be awaiting whether the Republicans and the Democrats reach a consensus on the latest stimulus measures.

Moreover, the market risk-on sentiment was further bolstered by U.S. President Trump’s optimism towards the American economy. He said he sees no reason why can’t the economy improve 20% in the 3rd-quarter (Q3). This positive headlines also gave support to the market trading sentiment and contributed to the metal losses.

The market traders still cheering the U.S. President Donald Trump’s action of signing four executive orders to release unemployment claim benefits, help with student loans, and aid for those living in a rented house, which also exerted a positive impact on the market trading sentiment and contributed to the gold losses.

Whereas, signs of economic recovery in China also supported the risk-on market sentiment. China’s consumer price index (CPI) increased 2.7% while its producer price index (PPI) dropped 2.4% in July from a year earlier, as per the National Bureau of Statistics report.

Despite the U.S. Congress reached closer to an agreement over the latest COVID-19 stimulus measures, and U.S. bond yields rebounded, the broad-based U.S. dollar failed to stop its losses and took the further offer on the day as the risk-on market sentiment weighed on the safe-haven U.S. dollar. However, the declines in the U.S. dollar helped the gold prices to limit its deeper losses as the price of gold is inversely related to the price of the U.S. dollar. Whereas, the U.S. Dollar Index that tracks the greenback against a basket of other currencies dropped 0.06% to 93.537 by 10:01 PM ET (3:01 AM GMT).

The precious metal gold’s bearish bias continues to drive it’s priced lower towards 1,972 level. Fortunately, we have already secured around 200 pips in gold and now, we are looking for another good point to take a buy trade in gold. For now, the precious metal may find support at 1,960 levels and resistance at 1,985. Let’s wait for market to settle down to secure the next trade.