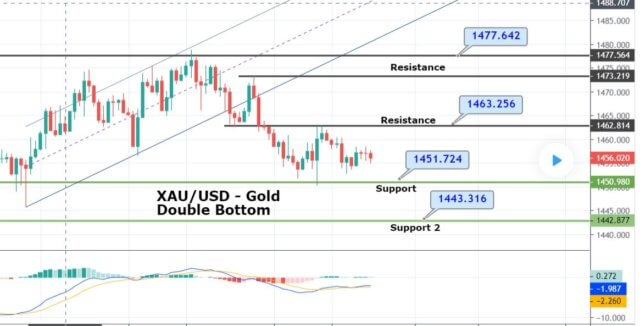 On Thursday, the precious metal gold traded in a tight $5 range trading range as investors assessed the impact of U.S. support of Hong Kong rebels on its trade agreements with China.

Demand for safe-haven assets like gold, silver, and Japanese yen increased as the U.S. President Trump signed the Hong Kong Human Rights and Democracy Act in early Asia, reaffirming support for Hong Kong’s pro-democracy protests after the majority of the City’s districts turned in favor of pro-democracy candidates with record voter turnout this week.

While China has frequently warned the U.S. administration not to interference in their personal affairs, therefore, President Trump’s move will likely hurt the relationship with China at a time when both sides are trying to reach a “phase one” trade deal.

On the positive side, the United States and China trade deal nearness and the optimism surrounding the United Kingdom December election result supported the market’s riskier assets and moved the greenback.

Besides, the greenback strength was robust U.S. data that decreased market speculations that the excellent time for the world’s largest economy will soon be over.

The traders will have a few data to watch due to the United States holiday regarding thanksgiving data; it means that the trade and political headlines will keep the market active.

Choppy dealing in gold remains as the yellow metal still maintains the full range of 1,464 – 1,452. Due to thanksgiving holiday today, we may not see much moves in the market. We can try to cap above 1,452 as below this gold can find next support nearby 1,447. The overall trend is likely to be mixed today.