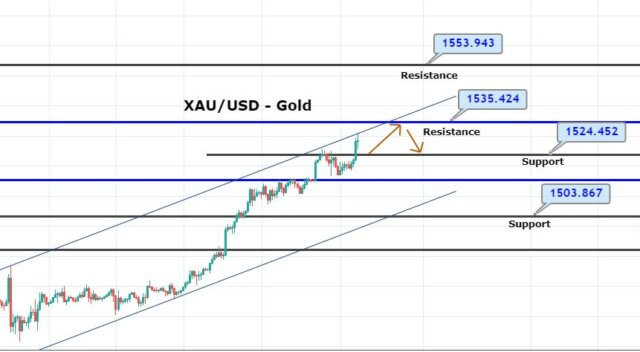 Gold prices soared higher on Thursday, staying near to a three-month top as the precious metal gold profited from bent in the greenback. The dollar index, which gauges the worth of the US dollar against the basket of six major currencies, was down with 1.9% in the previous month, which was its lowest level since July. A weaker dollar means cheaper gold for investors and a rise in Yellow metal prices in financial markets.

Investors also stocked gold after the release of PMI from China, where factory activity came in line with the expectations and growth in production at a solid pace was seen. This increased the confidence of traders that global economic outlook has started to get better on the rising trade optimism after the announcement of the phase-one trade deal.

Another factor including in the upbeat movement of the yellow metal was the rising tensions between the US and the Middle East. When the US military carried out airstrikes in Iraq & Syria against Iran-backed Katib Hezbollah, the protestors rallied over the US embassy in Baghdad.

This increased the appeal for safe-haven assets like gold and continued to support gold prices at the starting trading day of New Year.
Investors will be eyeing on the release of Manufacturing PMI & Unemployment Claims data from the United States to further invest in gold.

Gold may find next resistance around 1,533 levels as it’s a double top level, which may help sellers with a bearish opportunity. On the lower side, the support stays around 1,523.

Gold’s RSI and MACD are holding above 0, suggesting odds of further buying in the gold. The inside up bar on the 120 minutes chart is also supporting the bullish bias. But sooner or later, the pair is going to enter an overbought zone, and we may need to look for a selling trade in it. Consider staying bullish above 1,523 and bearish below 1,533 today. Good luck!