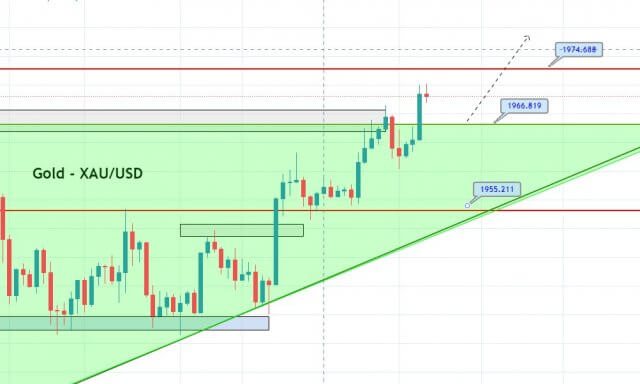 During Tuesday’s Asian trading session, the yellow metal prices extended its previous day winning streak and edged higher on the 2nd-day of a new week. However, the bullish sentiment around the yellow-metal prices has remained supportive by the prevalent selling bias surrounding the U.S. dollar. The losses in the U.S. dollar was seen as one of the key factors that helped the dollar-denominated commodity. Hence, the U.S. dollar was being pressurized by the doubts over the U.S. fiscal stimulus measures. Besides, the upbeat market mood, backed by the combination of factors, also undermined the U.S. dollar and contributed to the bullion gains. It is worth mentioning that the market trading sentiment was supported by the news suggesting that the Phase III clinical trial went very well, and the vaccine could be ready by November/December.

Meanwhile, the market risk sentiment got a lift after the upbeat Chinese activity data, which pushed the S&P 500 futures back on the bids to test 3380 levels. As in result, the upbeat market tone becomes the key factor that kept the lid on any additional gains in the safe-haven metal. Across the pond, the market trading sentiment was relatively unaffected by the Sino-American tussle, which recently picked up pace after the Trump administration banned certain Chinese products. At this time, the yellow metal prices are currently trading at 1,967.49 and consolidating in the range between 1,955.22 – 1,967.61.

While discussing the positive side of the story, the renewed optimism over a possible vaccine for the highly infectious coronavirus disease boosted the market risk tone. The hopes of the vaccine further boosted after the Chinese CDC chief biosafety expert tweeted that the Ordinary Chinese could take the #COVID19 vaccine as early as November or December as the phase III clinical trial went very smoothly. Meanwhile, the Pfizer’s optimism to provide the pandemic’s cure during this year to the U.S. also boosted the hopes of the vaccine. This, in turn, weakened demand for safe-haven metal and might keep a lid on any extra gains for the yellow metal.

Moreover, the risk-on sentiment was further bolstered by the latest headlines suggesting that the Customs Tariff Commission of China is considering extending tariff exemption on some of the U.S. goods imports. In the meantime, China’s Finance Ministry stated that the tariff exemption extension applies to products from the U.S. such as lubricants. Apart from this, the upbeat Chinese macro numbers also exerted a positive impact on market trading sentiment. At the data front, China’s August Retail Sales YoY, the number came in at 0.5% versus. 0% exp and -1.1% last, with Industrial Output YoY at +5.6% and +5.1% exp and +4.8% last. In the meantime, the Fixed Asset Investment YoY unchanged at -0.3% vs -0.4% expected and -1.6% last. At the same time, China’s January-August Private Sector Fixed Asst Investment dropped by 2.8% YoY.

Additionally, the reason for the upbeat market tone could also be associated with the positive news suggesting that the Trump administration quietly eased travel warnings towards China and Hong Kong. However, this news recently pleased the market risk tone, which tends to urge investors to invest their money into riskier assets.

Across the ocean, the fears of no-deal Brexit and the Sino-American tussle keep challenging the positive market tone, which might help the yellow-metal prices. At the US-China front, the tensions between Sino-US picked up further pace after the U.S. blocks Chinese goods made with forced labor. As per the latest report, the Trump administration has banned the import of certain apparel and computer parts from China, while saying forced Muslim laborers make them from the Xinjiang region.

At the Brexit front, the recent victory of the U.K.’s ruling Conservative Party-backed Internal Market Bill (IMB) into the House of Commons also keeps questioning the risk-on market sentiment. Although, the bill defied the opposition Labour Party’s motion for blockage but is yet to be announced as a law.

At the coronavirus front, the on-going rise in COVID-19 cases globally continues to fuel worries concerning the global economic outlook for the foreseeable prospect. The World Health Organization (WHO) recorded a record single-day hike in COVID-19 cases by 307,930 in 24 hours during this weekend.


Looking ahead, the market traders will keep their eyes on updates surrounding the Brexit, virus, and US-CHina tussle. Meanwhile, the U.S. Industrial Production m/m and Import Prices m/m will also be key to watch. The yellow metal gold traded distinctly bullish amid softer U.S. dollar to trade at 1,968 mark. On the upper side, the gold may extend trading upward unto 1,985 resistance. On the selling side, the XAU/USD may gain support at 1,963 and 1,955 mark. Overall, the trading bias appears to be bullish.