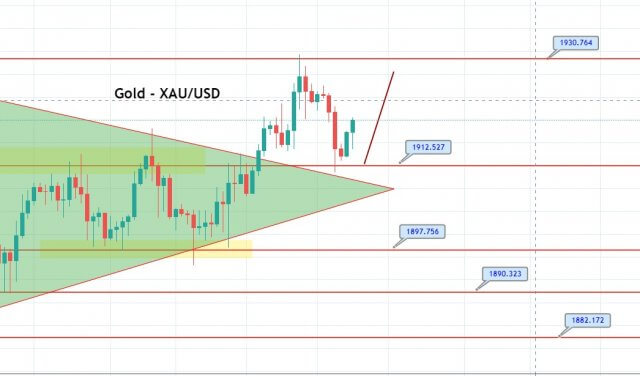 On the forex front, the U.S. dollar widened its weakness against other major currencies amid a looming fiscal stimulus deal. The ICE Dollar Index dropped 0.48% to a 7-week low of 92.61, posting a four-session losing streak.

The U.S. Federal Reserve said in its Beige Book economic report that all districts have seen continued growth at a moderate pace since the downturn. The central bank added that employment increased across all districts, and prices rose modestly.

On the downside, the 1,912 support level’s breakout may trigger further selling unto the 1,897 mark today. Conversely, gold has solid probabilities of jumping off above the 1,912 level to trade bullish unto the 1,930 level. Let’s look for bullish trades over the 1,909 level today.