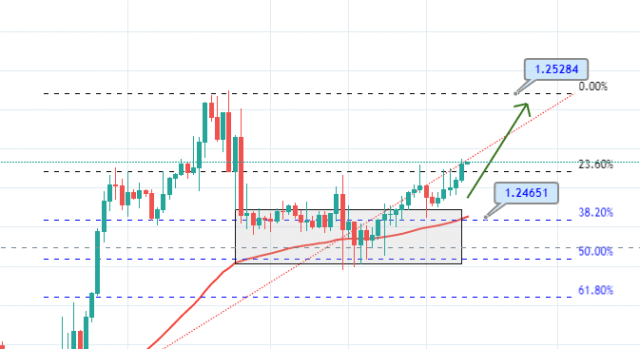 The GBP/USD currency pair extended its early-day gains and rose above 1.2500 level benefited from the broad-based U.S. dollar weakness triggered by the risk-on market sentiment. On the other hand, the latest warning over negative interest rates by the Bank of England Governor Andrew Bailey become the key factor that kept a lid on a currency pair’s additional gains. Whereas, the hopes of hike in property tax threshold, cut VAT triggered by the country’s Finance Minister Rishi Sunak could benefit the British Pound and underpin the upside in the GBP/USD pair. As of writing, the GBP/USD currency pair is currently trading at 1.2485 and consolidates in the range between the 1.2459 – 1.2510. However, the pair’s traders seem cautious to place any strong position ahead of Brexit talks in London.

The Brexit Party Chairman Richard Tice has already warned the E.U. over fisheries’ differences before starting the Brexit negotiations. The uncertainty in talks could also be associated with the Financial Times news that suggests the U.K. missed a deadline that could freeze funds.

On the other hand, the Bank of England (BOE) Governor Andrew Bailey held a meeting with leaders of banks at the end of June wherein they have discussed negative rates, and Bailey reportedly said, “every tool they have is on the table.” In the meantime, the British newspaper also reported that Governor Bailey had written a letter to bankers warning them of the challenges of negative interest rates. As per the message, the negative rates were one of the potential tools under active review if the MPC decided that more stimulus was needed to achieve the BOE’s 2% price target. This above report could become a key factor that pushes the currency pair lower below 1.2400 at the weekly opening.

Meanwhile, the country’s Finance Minister Rishi Sunak is considering plans to raise the property tax threshold to as high as GBP500K ($623,700) while temporarily slashing the value-added tax (VAT) in the hospitality sector, to boost the economy, as per the U.K. Times. This report helped currency pair to stay bid.

The currency pair traders will take clues from how the British Chancellor Rishi Sunak will use his Wednesday’s plan to control the economic gloom triggered by the coronavirus (COVID-19). As per the market forecast, the Tory government may use creative ways, like vouchers to adults and children, to inject further liquidity into the key economic sectors.

Besides this, the Tory government got huge criticism after people ignore social distancing rules triggered by the U.K.’s reopening of pubs and bars from Saturday.

At the USD front, the broad-based U.S. dollar failed to gain some positive traction and edged lower on the day mainly due to the lack of safe-haven demand in the market backed by the upbeat key data from the U.S. and China. Whereas, the investors cautiously withdrew their money from the safe-haven asset due to the optimism over U.S. services sector activity data due to be released later in the day. However, the losses in the U.S. dollar become the key factors that kept the currency pair higher. Whereas, the U.S. Dollar Index Futures that tracks the greenback against a basket of other currencies slipped 0.37% to 96.940 by 12:29 AM ET (5:29 AM GMT).


The GBP/USD pair is trading with a bullish bias above 50 EMA which is supporting the pair around 1.2479 level. Considering the support level and the bullish bias extended by the MACD and RSI, we decided to take a buying trade in the GBP/USD pair. But soon the Cable started forming bearish setup, and luckily we managed to close the pair in profit ahead of bearish reversal.