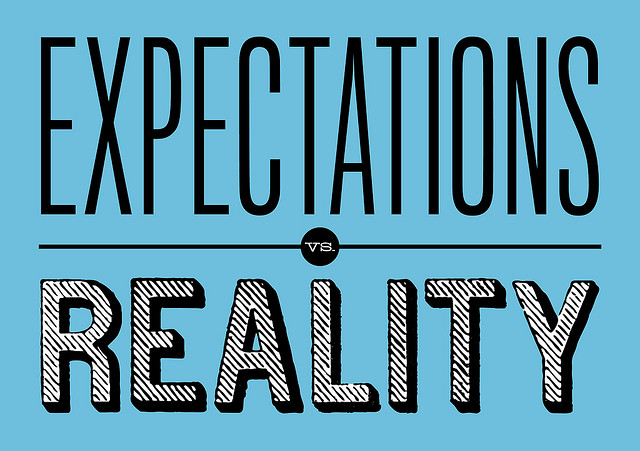 Let’s be honest, we all came into trading thinking that we were going to be rich, that is simply the expectation that a lot of new traders come into trading thinking, they have seen all the advertising spells with the present but often hidden warnings about the number of people who lost money. Due to these adverts and people on social media, people feel that trading is easy and that they will make a lot of money very easily and very quickly Or there are those that know very little about it that see it as gambling or a risk to do. Both of these expectations come from what they see from the outside, yet when we get into the actual facts, things are very different in reality than they are in their expectations. We are going to be looking at some of the differences between the realities and expectations of trading.

If you go onto social media you would get the impression that there isn’t really that much work to put in in order to make a bit of money, if you have watched a trading film, which is the only reference that a lot of people get, you will either think that there is an incredible amount of work or none at all. Either way, whatever your expectation is, it is probably wrong. Those coming into trading thinking that they won’t need to put on a lot of work will be in for a shock. There is in fact a lot of work involved. In fact, it can take a very long time to put on a single trade, if you want to be profitable then this won’t happen overnight. Instead, it will happen over months or even years for a lot of people. If you want to succeed then you need to ignore the idea that it is quick and easy and instead come to realize that you are going to have to put in a lot of time and effort.

From the outside, forex trading can look like a bit of a gamble, let’s be honest, the markets will either go up or they will go down which makes it a 50/50 chance right? Pretty easy to guess then, well not exactly. The markets are influenced by hundreds of different things, each pulling the market in one direction or another, it is up to you to work out which way it will go. You cannot however simply guess, if you do that, you are pretty much guaranteed to lose overall. Instead, you are going to need to take your time to analyze all the different indications and influences of the markets. This will enable you to see which is the most likely direction that the markets will move in. This can then give you the best chance to trade correctly, so it certainly is not gambling. It is all about weighing up the different probabilities and then trading in the most likely direction.

Many people seem to be coming into trading thinking that they will be able to make a lot of money off a $100 account, this is simply not the case though. Much like with anything in life, you need money to make money, the larger your account is the more profits you will be able to make. Those adverts that are promising you that you will make $100,000 on a $100 account overnight are simply trying to scam you out of your money. If you want to make a lot then you will need to start with a lot. Otherwise, you will need to slowly build up your account over a longer period of time. If you have a $100 account then you can expect to make a few quid per week, not double it up every single week.

There are hundreds of strategies out there, loads of variations of each one, so why some people come into trading looking for that magic formula that will make them profits all year round is very confusing. If there was one strategy that worked, then we would all be using it and all those other strategies simply would not exist. Not to mention the fact that if there was one strategy, the markets would simply cease to function, as everyone would be using the same strategy and putting on the same trades, meaning that the markets would come to a standstill. For this reason, there cannot be a single strategy that always works, instead, you need to learn a number of different ones in order to remain profitable all year round.

The simple answer is no. The markets are far from random but they certainly look like it sometimes. From the outside it looks like they simply do what they want, moving up and down whenever they want for no apparent reason. When in reality there are a lot of different things that can cause them to be and to influence the way that it moves. Trader sentiment, news events, natural disasters, and economic data are just a few of the things that can influence it. When they do take effect, the directions and the effects can be predicted, however even though it can be predicted to a certain extent, it can also move out of sync, moving against what would be expected. This is why trading is not a guaranteed thing, while it can be predicted to an extent, it does have a very small essence of randomness to it, but not as much as it may look like from the outside.

Another popular opinion amongst those that do not actually trade is that forex is basically a giant scam, it is full of people wanting to take your money and you can’t actually make any profits. The sad truth is that this is partly true, there are a lot of scammers out there, from traders, account managers, signal providers, and even brokers. There are ones that are there to simply take your money, but this is not what all of them are doing. There Are genuine people out there that are actively trying to help you to make money, there are some great brokers that are only there to help, signal providers offering genuine signals, you get the point. So while there are frauds out there there are also some great opportunities too.

Those are just a few of the expectations that we see people have and what is actually going on. There are some similarities in places, what we see is sometimes what we get, however, there are also a  lot of differences, once you actually get into trading you will come to find that there will be a lot of differences in what you experience compared to what you were thinking you were going to get.