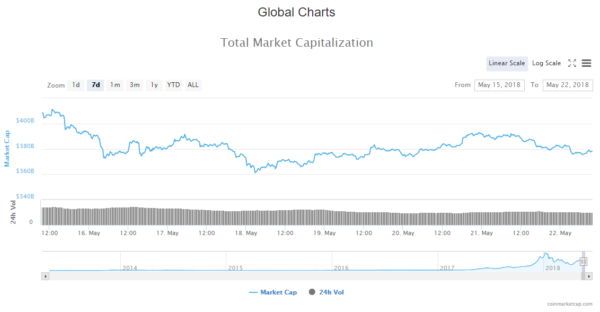 The market is in red, with approximately 3%-5% average decrease in value from top 100 cryptocurrencies.

Top stories that came out in the last 24 hours are mostly positive, however, there are no significant news that can impact the market. These are the most significant headlines:

Poland’s Ministry of Finance will temporarily suspend tax collection for cryptocurrencies, the Polish Press Agency (PAP) reported May 18. The Ministry says it will conduct an “in-depth analysis” of the crypto space to inform better regulation and taxation policies going forward.

Walmart has filed a patent for a blockchain-based marketplace for reselling purchased products, according to a US Patent and Trademark Office USPTO patent filing from May 17.

One of the largest financial supervisors in Europe met with the National Bank of Georgia (NBG) and other members of the finance sector to discuss cryptocurrency regulation, according to a post on the NBG’s site May 18.

On May 18, the Bank of England released a staff working paper, laying out various scenarios of possible risks and financial stability issues of central bank digital currencies (CBDCs).

Looking at the daily chart we can see that the price fell below 0,382 Fibonacci retracement level and is currently at the levels of the opening of the day before yesterday’s candle, which was a green candle, which broke out from the wedge pattern.

Zooming into an hourly chart we can see clearly what happened at the Fibonacci level. As you can see the momentum behind the move was strong, and the price is likely heading back to the wedge resistance for a retest.

Looking at the Ethereum daily chart we can see that the price was repealed by the resistance at 712$ and that from there the price only fell further.

Zooming into the hourly chart we can see that the price fell even further, but quickly bounced back to the support levels on which it’s currently sitting. The price found some temporary support, but judging by the momentum behind the move, that support won’t hold again.

On the daily chart, things haven’t changed much, the price is still in the range between 0,382 and 0,236 Fibonacci retracement levels, and after a move up it has retraced to the start of that move, looking for support.

On the hourly chart, we can see that the price was repealed by the resistance of the triangle from which it tried to burst but failed which propelled the price in a downward trajectory.

Crypto Daily Update: As I have projected in my weekly forecast, the correction is still in play and we are in for new lows. The prices failed to break resistance at prior highs, and as they entered sellers territory the selling has begun.